This is perhaps the hardest one I have ever talked about. But it’s not my fault! No, the culprit is Julian Casablancas,1 or whoever came up with the name of this band. The Strokes! I understand that they were probably just scrambling to find a noun X which had not been used as The X’s for a band name, but why did they have to go with stroke? Was meningitis already taken? Was conjugacy class not an option? That would be perfect for a group with five members! But no, they had to pick stroke and now I have to somehow avoid making a different strokes for different folks’ joke. Well that’s just great. 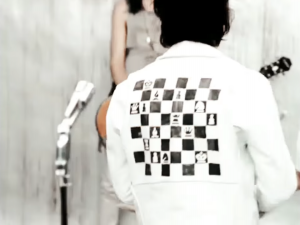 This guy who has turned his back on chess is the aforementioned Casablancas, who does the singing for The Strokes, as he is getting ready to make the highly original claim that you live only once. At least, that’s what you’d think, but if you actually read the lyrics, you’ll realise he never says anything like it. In fact, here, as with previous music videos I discussed, the text is hilariously stupid. Will the chess be any better? Probably not, but let’s find out.

Let’s first get the formalities out of the way: the board has been set up, of course. But now on to the real meat of the matter: the actual position. Correcting the small trifle of the board orientation, we find the following diagram: 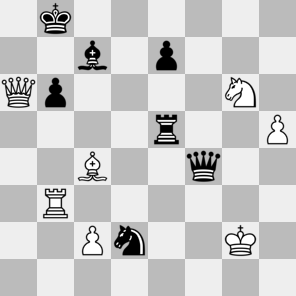 It is not clear whose move it is and that’s a pity, because rarely have I featured a position where the question was more poignant: black to move and it’s mate in 2,2 white to move and he can take a queen for free. The only recourse I saw for solving this conundrum was trying to figure out what the last move could have been, but this, too, is a considerable task. It is not hard to come up with a more or less plausible last move from black: he could have answered Kb8 to Qa6+. It is far harder to suggest a possible last move for white: if it was not with the knight currently on g6, he could have taken thee queen, if it was with that knight, he could have gotten his bloody priorities straight and try to do something against the threat of mate.

At least, that’s what I would have done. But, hey, different strokes…3

Realism: 3/5 I can actually see this position occurring in a free blitz game between some amateurs.

Probable winner: White. For the reasons mentioned above, we can assume that black made the last move, so white can simply win the queen.

1. [I realise that that’s almost Capablanca, but I’m not sure how I can extract a joke or even a vaguely amusing witticism from that.]↩
2. [How, I’ll leave as a small but not completely trivial exercise for the interested reader.]↩
3. [Dang.]↩