By: Nikolaas VerhulstPosted on October 30, 2018

Pretty much every time I talk about chess in advertisement, I point out that chess is used to symbolise intelligence and sophistication, but it has never been so blatantly obvious as today. It is a piece of advertisement for a Toronto based smokehouse which opened in 2011 and claims more refinement than your standard steak joint. To advertise this fact, they made a classy old fashioned poster featuring a carefully coiffed cow in what may be a smoking1 seated at a chess board. The bovine player looks askance at the viewer, as if inquiring what he might be staring at. Or maybe he’s just waiting for him to make a move. 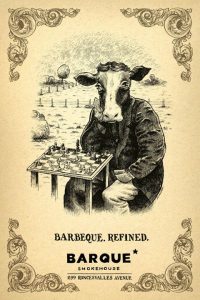 But there really is a very good reason to stare at him and his board. First of all, our representative of bos taurus is sitting at a corner of the table instead of at one of the sides, which is sufficiently weird in itself. Secondly, he has set up the board wrongly, as there is clearly a white square on the right hand side of the board. I suppose they don’t want to suggest the cow is too smart, because people would feel bad about eating it then.

But enough waffling! It’s time to take the bull by the horns and delve into the position. You can see it below. Take your time, because there’s a lot to ruminate on:2

Holy cow, what a mess! Yes, I’m going to keep milking the cow puns. Yes, the kings and queens have swapped places. Yes, there are nine white pawns. I tried my best to convince myself that one of them might be a bishop, but failed. The one on a4 should by all rights be a bishop, but it looks very much like a pawn to me. Even if we set aside for a moment these two huge problems, the position still looks unreasonable; as if thrown about randomly. There is no reasonable explanation for the absence of black’s b- and e-pawn, nor can f3 be made plausible.3

Seriously, even a bison could come up with a more logical position. No, really, just think about it for a second. By some accident, it might push some pieces on the board, but leave most off and thereby get a legal position. So whoever designed this – admittedly very well-drawn – poster did, quite literally, worse than some uncivilised bovine.

But, hey, only the barbecue was promised to be refined.

Probable winner: The position is incredibly complicated. White is a bishop down, but he has three pawns for it. The engines definitely like black, though.