By: Nikolaas VerhulstPosted on November 6, 2018

Today, we travel all the way back to 1924. The roaring twenties! It’s the time of the Weimar republic, Jazz is becoming big, Joyce’s Ulysses is published. But it’s not all bad news: it is also the age of art deco, Aviation is booming, penicillin is discovered, silent movies conquer the world. One of the latter is on our plate today: Das Wachsfigurenkabinett, a German movie from 1924 which was released to the English speaking world as Waxworks. The story is quickly explained: the director of a wax museum wants some stories to go along with his figures. For this purpose, he hires a poet. Most of the movie is taken up by the stories he comes up with. The first of those tells of Harun al-Rashid: “The caliph kept his brain from becoming as fat as his stomach by a daily game of chess with his grand vizier.”1

In this picture, the just caliph has just been checkmated, which greatly annoys him.2 What annoys me is that the position keeps changing from one shot to the next. Most of the positions are very hard to pinpoint, because the resolution is – surprise, surprise! – not very good, but it can be ascertained quite easily that they are different.

I am afraid that, if I have to go through all of them this will turn into a long and rather dull experience. To be sure, this will also be the case if I don’t, but in the former case I would have considerably more work to do, so I prefer to stick to the latter. In fact, to reduce the amount of work I have to do — like a proper caliph — I will show just one position, namely the one I get the best view of. Thus having reduced my workload, I arrive at the following position:3 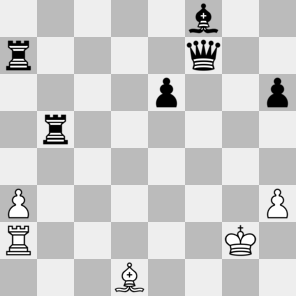 with the minor difference that, as is so often the case, the squares on the players’ right hands are black. This, however, can be excused as this convention was not yet widespread at the time this scene is supposed to take place. What can not be excused is the absence of the black king. It would seem a pretty reasonable position were the piece on f7 a king, but this piece has a tall, slender figure while the piece on g2, although tall as well, is rather plump.

Of course, this is exactly the sort of thing that Iznogoud would do: to make sure he will not be checkmated, he’s playing without a king. My theory – which is mine – is that he substituted a second queen, and thereby managed to win a rook, thus ending up in the above position. It will no doubt be sufficient for victory.

Realism: 0/5 There’s no need to wax poetic about it: the position is illegal.