By: Nikolaas VerhulstPosted on November 13, 2018

Toen was geluk heel gewoon (back then, happiness was normal) was a Dutch sitcom that ran for sixteen seasons between 1994 and 2009. It was loosely based on The honeymooners, an American series from the fifties and was supposed to play in more or less the same time period, making it a bit of a strange sight in the nineties. Of course, from the fact that I give you all this information, you can easily deduce that there must be an episode dealing with chess, and, indeed, in the sixty-seventh episode, our royal game plays an important role. 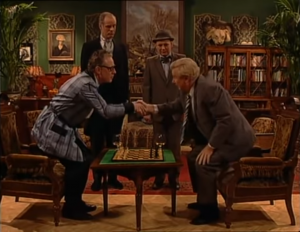 The plot is that Jaap Kooiman, main character of the series, claims in a bout of stupefying stupidity that he is great at chess while he doesn’t even now what the pieces look like. As the cherry on the sundae, he makes this claim to Mr. Harmsen, Kooiman’s boss who has been invited to an invitational tournament in East Berlin and is looking for a better sparring partner than his butler. Jaap gets an invitation to come play a game in the evening and he gets duly mated in the stupidest of fashions: 1. e4 h6 2. Qf3 Na6 3. Bc4 Rh7 4. Qxf7# (game included below at the end of the page).

Mr. Harmsen then suggests that Simon Stokvis,1 Jaap’s friend who tagged along, take that deplorable’s place.2 Now things go a bit less smoothly for Mr. Harmsen. What exactly happens is unfortunately hidden behind a cut; we only get to see 1. e4 e5 and then the very end of the game, when Mr. Harmsen is in the unenviable position of having the (very few) white pieces in the following diagram:3 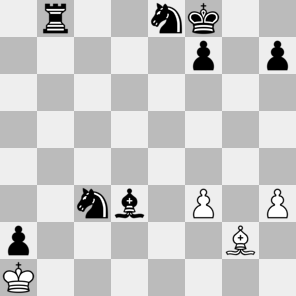 It’s black’s move and, to the astonishment of Mr. Harmsen and his butler, he plays Rb1#. This elicits an incredible monologue from Simon:4

Simon Stokvis: After that queen exchange, my plus pawn becomes more important as castling has blocked your rook – which, anyway, in the Sicilian defence can’t do much against my Grünfeld-Indian middle game.

Stokvis: Yes, it’s just like the sixth game from the sensational chess match between Dr. Lasker and Capablanca in Havana 1921, when Dr. Lasker opted, with a piece sacrifice, for a draw by perpetual check, but he had overlooked the bishop on f8 which he only noticed when the flag fell. Yeah, then Capablanca was, of course, world champion.

That’s an incredible heaping load of baloney. There was indeed a match for the world championship between Lasker and Capablanca in Havana in 1921 and the sixth game did indeed end in a draw – but that’s pretty much the only truth in the whole thing. There was no piece sacrifice, there was no bishop on f8 after move 6, and the comment about the flag makes no sense at all. Furthermore, castling tends to unblock rooks, rather than block them, and there can be no Grünfeld-Indian middle game – which, by the way, is not someone’s middle game – anywhere even close to the Sicilian defence.

I have read many chess books from the fifties and sixties and I can promise, these things were not normal, back then.

Realism: 3/5 The position pictured might occur in a game which has been drawn out too long, but there are some strange things. How, for example, did the knight end up on e8? White’s bishop also looks very silly on g2, but that might just be due to weak play by white.

Probable winner: Well, in a game between a human and Stokvis, Stokvis is going to win.

1. [Stokvis, unsurprisingly, is Dutch for stockfish, making the bearer of that name’s skill on the chessboard a remarkable piece of televised prophecy.]↩
2. [And, for that matter, his cognac.]↩
3. [Diagrams were normal, back then.]↩
4. [Freely translated from (rather butchered) Dutch by me.]↩