When people talk about great Disney movies, they usually mention Fantasia, Toy story, The lion king – but no one ever mentions Basil, the great mouse detective1 and that’s a great shame, for it is a sublime film. It is based on a children’s book by Eve Titus which, as the name of the movie suggests, heavily draws inspiration from Sherlock Holmes and the imagery associated to him. The story is about Olivia Flaversham, an adorable little girl who lives happily with her father until he gets kidnapped. This is clearly a case for the great Baker Street detective and he, indeed, gets duly involved, together with Dawson, a former military mouse who2 just arrived in London after a long stay in Afghanistan. In their search, the terrific trio ends up in a big toy store at night. There, they walk over a chess board: 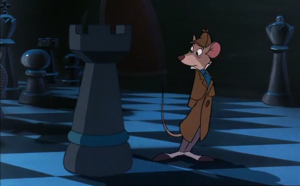 When he is almost across the board, Basil stops. He contemplates the position for a second and then pushes the rook next to him.

Directly before this, we were treated to a nice overhead view of the chessboard. The position on the board is shown below; it is completely incompatible with the screenshot above. Indeed, in the screenshot, the black rook stands on an 8 squares long white diagonal, so either on b7 or g2, while it is on g4 in the overhead view:3 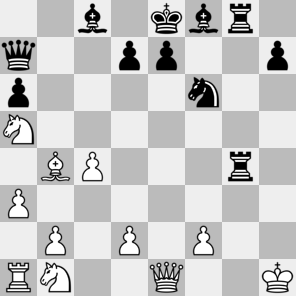 Setting this aside for the moment, it must be admitted that pushing the rook, as Basil does, is indeed a checkmate. (At least in the overhead position.) The mate itself is quite obvious, but that he somehow established it was black’s move is a feat worthy of Holmes himself and is testament to his great skills as a detective. How he did it, I cannot say. The position really does have some retro-analytical content,  but it is not enough to establish whose move it is. Presumably, Basil found some subtler clue; like a white piece with less dust on it.

Trying to find out what happened in this game is too great a task, even for a mouse of Basil’s considerable abilities. What brought the queens to their current places, for example is a bit of an enigma. How the bishop ended up on b4 is even more mysterious. Clearly, a white pawn must have promoted – to a bishop, no less! – and then found its way back to the white front lines, but how that came about is anyone’s guess. Therefore, Basil gives up and moves on. Then suddenly the whole toy shop comes alive! All sorts of wind-up mechanisms jump to action, music boxes start tinkling, tin soldiers start marching, little plays are acted out. All of this is shown in a nice overview shot, with our three heroes as small figures in the background. Behind them, there’s the chessboard – but the position is yet again completely different! Here it is: 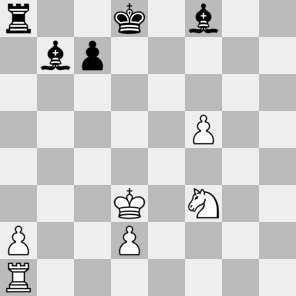 this time, the board only appears in the background and it is possible that I have misidentified a piece or two, but their positions are definitely as above.

At first, my instinct was to argue that the position did not, in fact, occur in an actual game, but is rather the result of some salesmen trying to make the board look attractive. This, however, does not explain the double make-over of the position. The only explanation I can give for that is that the animators were using pot for Basil.4

Realism: 1/5 The last diagram gets an extra point because there’s no minor-promoted piece on the board. The screenshot would earn another point or two, although it might be hiding some atrocities in the corners we don’t get to see.

1. [Basil, incidentally, is named after Basil Rathbone who famously played Sherlock Holmes.]↩
2. [Should I use ‘who’ or ‘that’ here? I think that, grammatically, the latter would be correct as we’re talking about a mouse, but it seems almost insulting here.]↩
3. [The detective found this, which helped him in his search.]↩
4. [Yes! Yes! It wasn’t easy, but I managed to smuggle in a reference to the pot of Basil.]↩