Can I go on a little rant for a moment? Well, this is my blog, so I most definitely can! So here I go: modern advertisement makes no sense. Usually, it is impossible to know what an ad is actually trying to sell to you before it explicitly tells you and even if it is not impossible, the scene has very little do to with what’s advertised. Case in point: a tv commercial for Vittel’s bottled water, showing some chess game in progress. It’s probably quite an important game, as many spectators are shown at some point. The guy in the following picture, who is leading the white pieces, seems to be suffering quite badly. 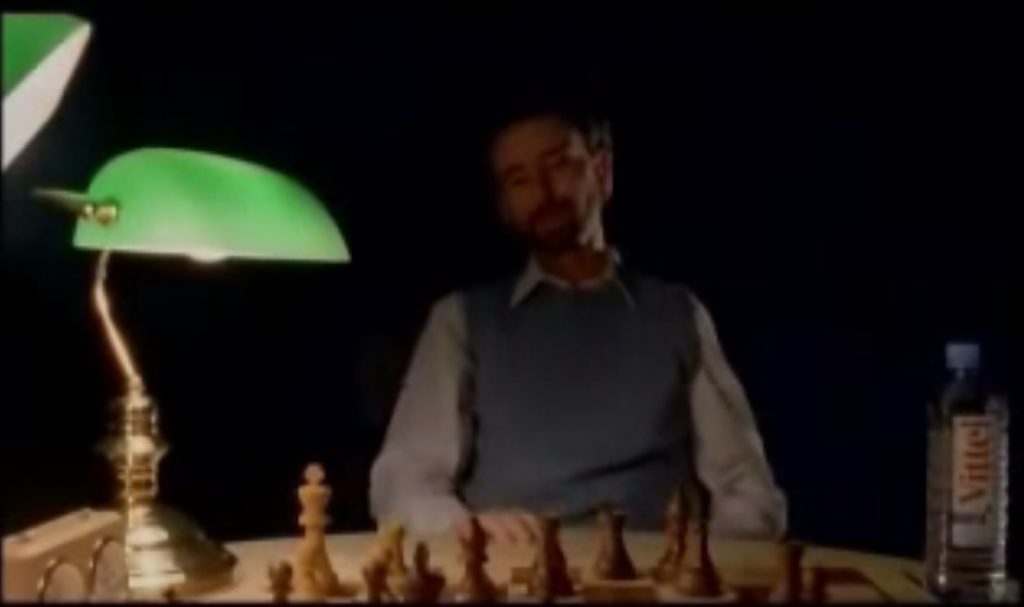 The most immediately obvious unrealistic thing about this whole set-up is the lighting. Two of those weird designer lamps you might find in a vintage shop and, apart from that, nothing. Just pitch black darkness. Of course, as in any televised chess, both players play far, far too fast for a serious chess game.

But what does the position look like? Ah, that’s a delicate question! You see, a few seconds into this commercial, there is a relatively clear top-down view of the board. Sure, it is quite hard to recognise pieces from above, but it is very easy to see on what square they are. Keep that in mind when analysing the position. Here is my reconstruction:1 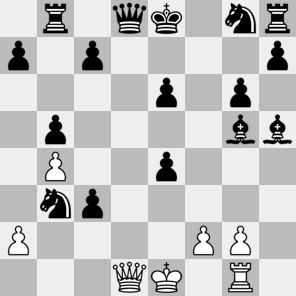 At first I thought the piece on g5 was a pawn, but this cannot be, for there would be nine black pawns then. Anyway, which exact piece is standing where is rather irrelevant. It is more important to compare this position to the one in the picture above, which pops up a few seconds later, and to recognise that they are blatantly incompatible: suddenly, the white king is on h2, black had gotten a knight to e2, a rook to d1, his queen to c2 — an implausible amount of changes, if for no other reason then simply because white should have been mated before.

But the worst is yet to come: the white player, recognising the hopelessness of a further struggle, gets a new white bottle and uses it to break the glass in one of those manual fire alert call points. This activates the sprinklers in the playing hall and, drenched, his opponent leaves the board. All very horrible, indeed, yet, still, the worst has not come. There is still one thing: there is still the ad’s motto:

Vittel. Gets your thinking straight.2

Realism: 1/5 Almost any piece is where it shouldn’t be: the white rook on g1, the black bishop on h5, the pawns on c3 an e4, especially the black knight on b3 — how on earth did they end up where they are? And, perhaps an even more pressing question: how did so many white pieces disappear without taking any black piece with them?!

Probable winner: Black. Annoying your opponent is expressly forbidden — and drenching would certainly qualify. Even without that, the game would be continued at a later point and white would be justly crushed.

1. [Let me make a small advertisement for this diagram editor here.]↩
2. [If this is what happens after one’s thinking has gotten straight, I really don’t want to know what it was like bent.]↩