By: Nikolaas VerhulstPosted on October 2, 2018

And once more we end up in our wheelhouse: crime fiction. This time, we’ll talk about a British made-for-tv movie from 1984. Angela Lansbury plays Ann Royce McClain, a crime fiction author who has produced dozens of detective stories but now finds herself in the middle of the plot to one, as one of her heritage hungry relatives turns up dead in her garage. But long before that, we can see her in her wheelchair playing chess with her doctor and former lover Anthony Wainwright, played by the great Laurence Olivier. Those are some of the greatest names in the world of acting – together they have over a dozen Oscar nominations – so there is clearly a talent for acting here, but is there a talent for chess? Let’s investigate! 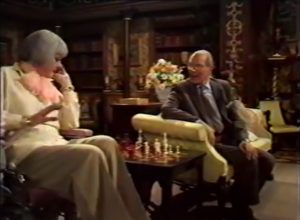 Angela herself seems to be rather startled about the position – and I would definitely have a comment about that if it was not addressed in the film:

McClain: I believe it’s my move.

Wainwright: Why you still got this board set up? It’s been six weeks.

McClain: Ooh, somebody appears to have moved my bishop to bishop four.

It is quickly established that doctor Wainwright did indeed move her bishop. I was elated to hear this because, with this image quality, every little bit of information about the position is important. I have not been able to reconstruct it with any degree of certainty – the fact that they’re using highly non-standard pieces doesn’t help – but I have tried nonetheless. The result is as follows:1 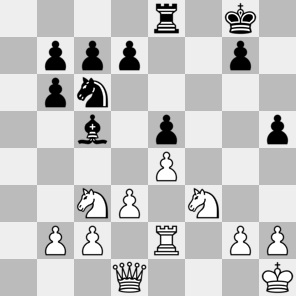 If I am right, or even if I am close to the actual position for some loose sense of term, there is something very weird about this. I don’t mean the actual position – it seems largely inoffensive, even if there are some curious things going on – but the context: apparently, doctor Wainwright has moved black’s bishop to c5, but why would he do that? Where else could the bishop have been? Wherever it was, it must have been a worse square, so, strangely, Wainwright is helping his opponent.

He’s trying to lose at chess! What’s more, he’s trying to make it seem like his loss is due to his opponent’s chess skills, and not just due to unsightly blunders. If there ever was a sign of love and devotion, surely this is it – as misguided as it is.

Realism: 3/5 I do wonder what happened to white’s a-pawn or to black’s queen, but at least there’s nothing insanely stupid to see.

Probable winner: Wainwright. He would have to cheat a lot more to give his opponent a real chance – and I don’t think she would take kindly to that.

1. [Here you can investigate yourself.]↩