I have a conjecture: every sufficiently well-known fictional detective will sooner or later be confronted with chess. A slightly – but only very slightly – stronger variation of this conjecture would be: every sufficiently well-known fictional detective will sooner or later end up on this site. As evidence for this conjecture, their are e.g. the cases of Poirot, Columbo, Holmes and, since today, Maigret. As you probably know, Maigret is a French detective in the police force, created by Belgian Georges Simenon, which makes this extra appropriate for this site. In this post, we’ll talk about the long running tv show Maigret with Bruno Cremer as the eponymous hero.1 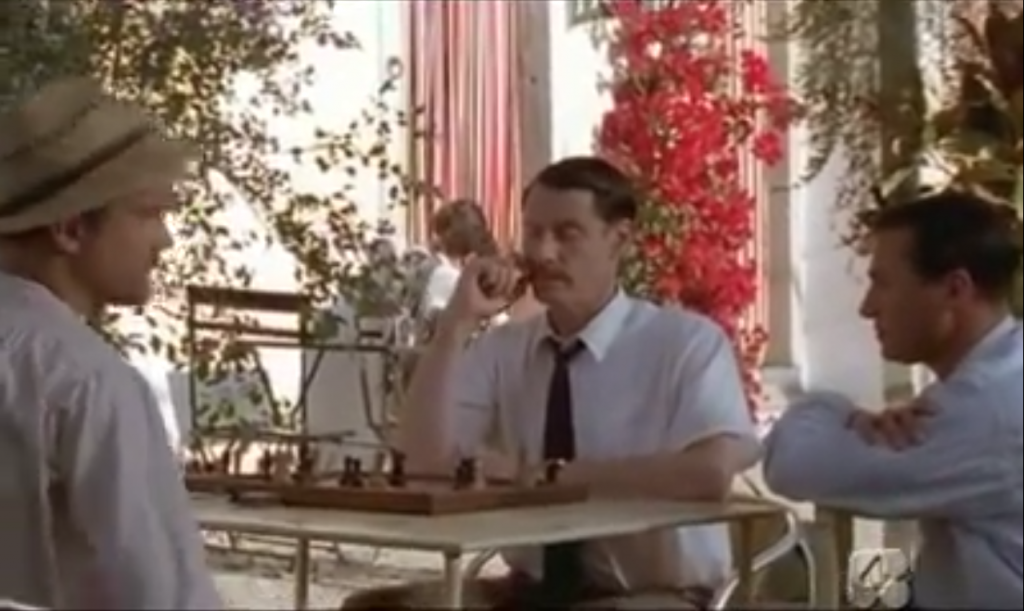 In episode 35 of the series, Mon ami Maigret, the great detective is accompanied by Scotland Yard agent Pyke (Michael Morris), who wants to study his non-existent methods. Of course, as an Englishman on a small Mediterranean island,2 he’s like a fish out of water, so he bides his time in the shadow, waiting for cooler days to come down the pike. We can see him playing white in the above picture against Yann Deferre (Jean-Michel Portal), a local painter. This painter happens to be one of the suspects in the murder case Maigret is trying to solve, presumably on the grounds that no decent person would ever wear such a hat.

The director, a certain Bruno Gentillon, has been uncommonly courteous in that he gives some very clear shots of the board, which allows us to reconstruct the position with virtual certainty. It is as follows:3 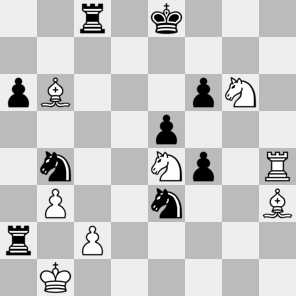 For a moment, I thought the board had been set up wrong, with a8 being black, but this is not the case; the board just happens to have a high rim which obscures one of the ranks. Good, because we have other fish to fry. What happened to the pawns, for one thing? Or how did black get his rook to a2? How did white sacrifice a rook and two (soon three) pawns for the two bishops?

Whatever the case, black plays Rcxc2, overlooking the pretty mate Nd6#. I have to give props to the directors, though: I can actually imagine someone overlooking this mate, as it is a pure one with six unoccupied squares. On top of that, it was really hard to find a decent defence. Of course, Stockfish finds Rc6 in a jiffy and gives it a confident 0.00 evaluation, but for a human being it’s very hard to see that one can weather the storm coming after moves like Bc5, Bf5, Rh7, etc.

Realism: 3/5 I feel I’m being very lenient, but after a while you get so used to these monstrosities and it becomes harder and harder to muster up the cod indignation to moan about the same goddamn problem over and over again.

1. [Yes, the series was broadcasted on Rete 4. However did you guess?]↩
2. [Which, incidentally, is called Porquerolles, pronounce: pork roll.]↩
3. [By now, I think this is the ofishal diagram provider.]↩