If you have read some of my other blog posts, you will have noticed that I usually start with a short text providing context for the subject at hand. But sometimes, I simply fail. Sometimes, not even the pen of Dickens, Milton or the Great Bard himself could do justice to the truth. Sometimes, words are not enough. This, I think, is one of those times. I do not know how to prepare you. I do not know how to soften the blow. The only thing I can suggest is that you cast your eye on the image below and marvel. Marvel at the sight of a giant rotino playing chess. 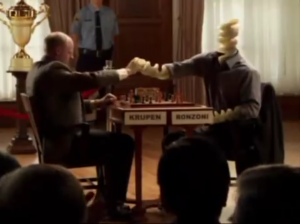 But of course this cannot be, for a rotino has only two ends, not three – which means there is one appendage too many in the above picture. Probably, someone overcooked his pasta so badly1 that it started to clump together into an inseparable mess which, perhaps after the addition of an ancient ans slightly odd-looking sauce found in the back of the fridge, gained sentience and took the chess world by storm. It somehow qualified for the candidates’ tournament, won it, and is now playing a match against reigning world champion Krupen.2

We are thrown into the match very close to its endpoint. Ronzoni, the giant rotino3 has played a move we don’t get to see. An unseen narrator takes the word:

UN: Krupen’s knight is pinned. What a brilliant move by Ronzoni!

And this, boys and girls, is where the story becomes implausible. We get two pretty good shots of the board: once from above and once from the side. In the latter shot, there is a black pawn on b7, in the former not. Except for this discrepancy and apart form the identity of the piece on h2 there is very little doubt that the following position is on the board:4 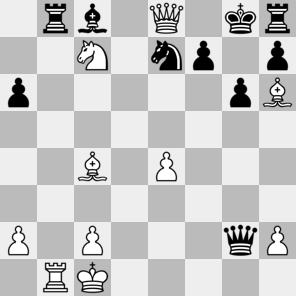 Obviously, black’s knight is not pinned, but even if it had been he would probably be more concerned with the fact that he’s been checkmated, which is a rather serious affliction in chess. I’m also not sure how the previous move could possibly have been brilliant. It was a mate in one, for God’s sake, that should not be too hard to figure out.

Certainly not as hard as figuring out how this position came about. The positioning of the kings suggests opposite side castling, but the rooks on b1 and h8 contradict this. Black’s queen probably ended up on g2 after wining an exchange on h1, somehow. But this expedition, as is so often the case, turned out to be too expensive. Like tagliatelle ai porcini.

Realism: 3/5 The fact that I can actually come up with more or less reasonable explanations means that this is leaps and bounds ahead of the usual fare on this blog.

1. [Which is still not the worst failure in making pasta.]↩
2. [The fact that the reigning world champion’s name starts with a ‘k’ lends a lot of credibility to this commercial. Perhaps giant chess-playing rotini really do exist.]↩
3. [Which I guess would just be a ruota.]↩
4. [To make such a diagram take this, add water and a pinch of salt and cook for ca. 7 minutes.]↩
5. [And I’m not even remotely sorry for that.]↩