It is time to bring some culture to this blog again – and nothing screams culture like some classical painting. Besides, the last time I did this, it went quite well. So I’m going to do it again! This time, the focus is on Herbert Ashwin Budd, a 20th century English painter who is mainly known for not being that well-known. One of his paintings – the only one I’m interested in – is titled The chess board and, unsurprisingly, features a chess board. Or at least most of a chess board.1 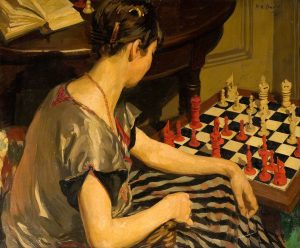 I do not know who still lady is and I don’t know what she’s doing. There doesn’t seem to be an opponent on the other side of the table nor does there seem to be room for a clock. To me, this suggests that she’s trying to analyse a position or to solve a problem. Or that she’s simply bemoaning the fact that the universe, in all its cold callousness, has still not bestowed the blessings of a decent set of Staunton pieces on her household. Or, even more likely, she’s waiting for the internet to be invented so that I can start this blog and she can send me the position, for it is a sight to behold.

Let’s have a closer look:2 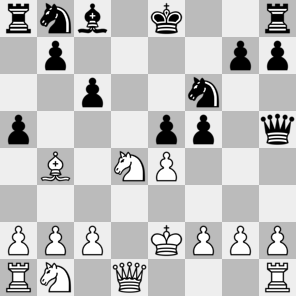 Of course, the white pieces on a1, a2, b1, and b2 are completely my invention and there is no reason to assume they actually exist. Except for the fact that this would make the theory nicer and that the beautiful solution is usually the right one.

By that adage, however, this position should have never arisen in the first place, for it is far from beautiful. Somehow, white has managed to trade his light-squared bishop for his opponent’s dark-squared one, he has hung two pieces,3 and has ventured forth with his kings in a bold but misguided attempt at courage.

But maybe Budd’s model didn’t like board games and got, due to the chess, bored.

Realism: 3/5 It’s not too bad, you know. Locally, everything seems rather logical. It’s just that apparently the Hasse-Minkowski principle fails and globally it seems unrealistic.

Probable winner: Black can grab a piece now and has already decastled the enemy king. That should be enough.