I found a new bizarre niche of CIPC material to get lost in! You can go online, find some pictures of cheap chess sets and revel in the weirdness of the cardboard boxes they come in. As for the chess program covers I talked about before, one would expect that these are products aimed at chess players and that the designers therefore would have made some effort to make them not look ridiculous and, here as there, one would be sorely disappointed. So I scalped some pictures from amazon and will parade them on your screen for your amusement. 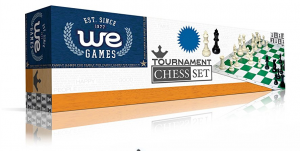 This is an American style tournament chess set, which includes a flexible board. The position on the board is pretty clearly this one:1 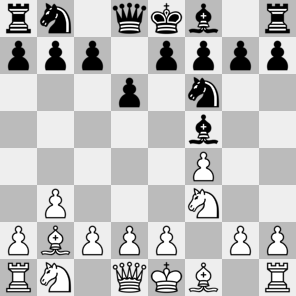 The most unlikely thing about this position is that, apparently, someone played the Bird opening. And that someone answered with an old Indian setup. What probably happened is 1.f4 d6 2.b3 Nf6 3.Bb2 Bf5 4. Nf3. This is certainly not the most common opening, but it’s not unheard of and there’s nothing majorly wrong with it.

Realism: 5/5 Admittedly, it’s kind of hard to screw things up in only 4 moves, but still: they didn’t do it.

Probable winner: Impossible to say at this moment. Engines will probably evaluate this position as balanced, so maybe it’ll be a draw. 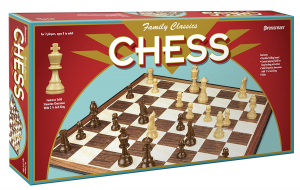 Here, the board and pieces seem to be wooden, which is a step up, but the position shown is definitely a step down: 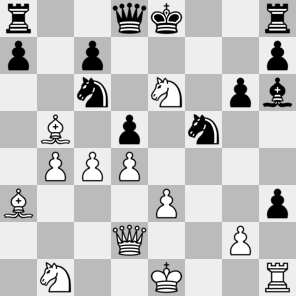 As is clear from the box cover, black’s queenside is not completely shown. I have given black a rook on a8, mainly as a sort of consolation because otherwise of his position would be so depressingly bad: he’s missing a bishop, his queen is hanging, his knight on c6 is hanging and pinned, cxd5 is an annoying threat to which Qxd5 would be a less than optimal riposte in view of Nxc7+.

How this mess came about is a different question. Especially the black pawn on h3 must have had an interesting journey, but the fates of black’s b-pawn and white’s f-pawn are also unclear. And the less said about the wilder Reiter on e6, the better.

Realism: 2/5 and at least half a point of that score is because I got to make a Schumann reference.

Probable winner: With the rook on a8, black has a good chance in Qh4+, without the rook white is better. 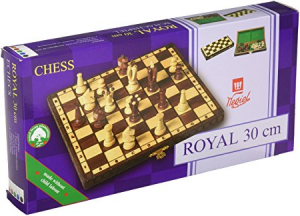 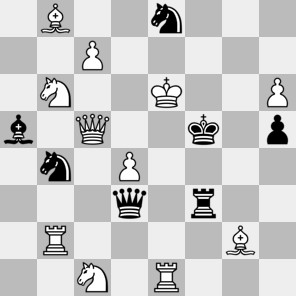 Who keeps designing box covers for these? This is ridiculous! It looks like someone just randomly strew pieces all over the board. That really is what likely happened, for how else would the two kings end up next to one another?

Realism: 0/5 How could it be worse then illegal?

Probable winner: Whoever is to move could capture the opponent’s king. I guess that’s a victory condition?

Conclusion: there’s a future to be made in designing covers for chess related products.