Long time ago, in this very galaxy, I wrote a post showcasing some chess-themes book covers. At that time, I expected I might be able to write a similar post with some more book covers, but I never expected to write one about chess software covers. After all, if you’re selling chess programs, your clients are probably going to be chess nerds – exactly the demographic which might be put off by unlikely cover art. Once more, I vastly overestimated the effort people put into these things: there are tons of computer engines with horrible front covers. There are so many, in fact, that I can fill a whole damn blog post with covers from the Sargon series alone.1 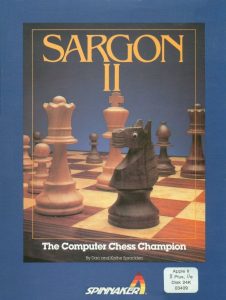 The Sargon series, for those not in the know, is a line of chess programs.2 Sargon I was, as far as I can ascertain, the first commercially available chess program. I have not been able to find a cover for this first edition – in fact, I’m not even sure there was such a thing – but Sargon II got the front art you can seen above. The image is very clear, so I will not provide a separate diagram.

The position is not completely ridiculous, but I wouldn’t precisely call it realistic either. The white king is either on e3 or d6. The former seems more probable, but still not very probable. Why is the d-pawn frozen in place? Why did the king boldly go where no king has gone before? Most importantly, where are all the pieces? This seems to be the result of a wild kingside attack by black, which suggests that we’re in the middlegame. But if so, there should be more pieces? What happened to them? Where they stationed on the Flannan Isles? 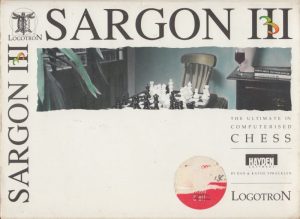 This is the cover for the Atari version of Sargon III, which apparently was released in the late eighties. At this point, the program had improved a lot, of course. Had the cover followed? Well, this time a diagram seems warranted, so here goes nothing:

… That seems to be a clear “no”. What the hell happened here? Apparently, white resolved the pin of his knight on his queen, and then decided to move his king right into it. To recompense, black weakened his kingside with f6 and has confined his development to getting his king’s knight to e3.

Probable winner: White is a pawn up. That should suffice. 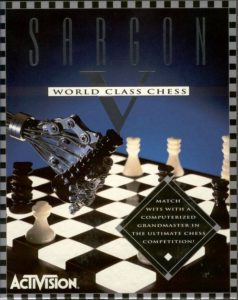 Oh my God, that’s horrible. The normal Stauntons have been replaced by completely unusable modern pieces. The white one on the left is clearly the smallest of the bunch, so it is reasonably to assume that it’s a pawn. But look at the square on the bottom: it’s white, implying that the pawn has just reached the eight rank. Okay, but why is the robot holding a black queen? The only possible scenario is that the pawn took a queen on the eight rank, but it just doesn’t add up: in executing such a move, one would first remove the queen, then move the pawn to the eighth rank and then replace it for a white piece.

Probable winner: Me, because I’m done with this! There were no further Sargon editions.3 So I can safely say goodnight Sargon.

1. [As well as a line of Assyrian kings.]↩
2. [All images come from here.]↩
3. [Well, there was a CD-i version, but I will not discuss that one, because its cover shows some pieces falling on the board but it’s not clear where they will land. Plus, it’s CD-i.]↩