I think I’ve said this before, but it bears repeating: there’s some weird stuff on the internet. There’s a subreddit dedicated to unexpected factorials, there’s a website about Belgian chess history, there’s a website to take you to useless websites. Why wouldn’t there be a place for comics about philosophers? Of course there is! And there’s chess in it! Which is great, because I haven’t discussed any webcomics so far. In the first strip of the 215th instalment, we see Sartre playing against de Beauvoir.

We can see here how Sartre, in his earlier days, had a certain inclination for the reigning clerical orthodoxy but later, after critical self-reflection, frees himself from the suffocating embrace of the norms permeating ambient culture and decides to refocus his discourse on the development of the second sex. Surprisingly, de Beauvoir protests this move, calling attention to the hermeneutics surrounding the societal convention of the pièce touchée rule. I believe that, in view of its heterodoxical challenging of expectations, this reaction deserves some deconstruction.

Simone1 has a point, of course, in that this is a clear transgression of the boundaries implicit in the social contract governing the participants, active and passive alike, of that circle epitomising the boutade of homo ludens, the chess club. Still, she might have mentioned that the board was set up wrongly. Correcting this obvious failure to confirm to societal assumptions we arrive at the pictorial representation, visible hereunder, of the intricate interplay between the different forces reigning over the board…2 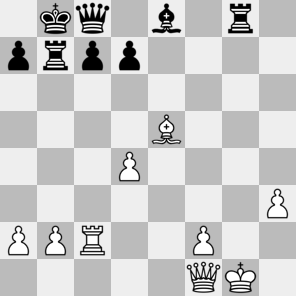 …and there’s some serious reigning going on on the g-file. There is the distinct possibility, of course, that my reconstruction is not correct, but I feel fairly confident. There is definitely a white king on g1, a plumpy black piece on g8, and nothing in between. Since the g8 piece looks very much like the c2 piece and since this one resembles a rook, I am proven correct.

Which raises the question of why Sartre did not move out of the check? It might be a deliberate choice of the artist, referencing the perceived heterodoxical nature of Sartre’s philosophical viewpoints and his possible anti-royalists sentiments, but this hypothesis must be immediately discarded in view of the implausibility of de Beauvoir’s replique, as in particular the falling back on the pièce touchée dictum seems indefensible in the presence of the much more pressing issue of the check.

I think there is but one possible conclusion, one possible way to resolve this dilemma: they must both be idiots. Or, I guess, the author of this comic doesn’t know much about chess.

Realism: 0/5 which is the score I’d expect from philosophers. It’s comforting to have one’s prejudices confirmed.

Probable winner: Simone de Beauvoir, her opponent is down a rook, just made an illegal move, and lost on time. That’s enough for a 3-0 victory, if necessary.

1. [Also the first name of Belgium’s best female chess player.]↩
2. [(De)constructed3 with this.]↩
3. [What’s the policy for parentheses at the beginning of a sentence?4 Should I have written a capital c? That’s seems so wrong.]↩
4. [Or nested footnotes, for that matter?]↩