By: Nikolaas VerhulstPosted on February 27, 2018

QI, Only Connect… the Brits have probably the greatest quiz programs in the world. It is not surprising, then, that every year there is an extra long, extra special one: the big fat quiz of the year. Due to enormous popularity, there have been special editions about the seventies, the eighties, the nineties, an anniversary edition, and a few big fat quizzes of everything. Of course, this wouldn’t be an English tradition if there weren’t a few traditions within the tradition. One of those is that children of the Mitchell Brook primary school play out some event from history and the players then have to guess what event it was. These little plays are the whole reason I bring up this quiz. Just look what these children played in the big fat quiz of everything 2018. The panellists get to see a short clip, but we’re amongst experts here, so a still-shot should do:

The stereotypically Russian guy on the left, the weird robot on the right, the ridiculous almost-chessboard in between them… It’s pretty clear: this is about the founding of this blog. It is also clear that these children aren’t very good at plays, because they got the year wrong by two decades! None of the panellists get the right answer. They all suggest it’s about Kasparov’s 1997 match against Deep Blue, but that seems less likely. What teacher would led his pupils embarrass themselves by parading around a5-by-5 board in a story about chess?

I’m especially peeved by this, because now I cannot decide whether the king’s rook square should be white or the queen’s rook square should be black. Not that it’s important, mind you; there is a pawn in a corner, so the position is in any case illegal. Still, I feel morally obliged to attempt some sort of reconstruction. To this end, we must first identify the different pieces. The pawns are small faceless dudes, the kings are the ones with crosses on their helmets and the knights’ heads are adorned with manes, this much is clear – but what about the remaining four pieces? Two of them have battlements on the walls on their crowns, the others have spikes. My guess is that the former are rooks and the latter are queens. Under this interpretation, the position is the following, where, of, course, the position is restricted to the square c1-c5-g5-g1:1 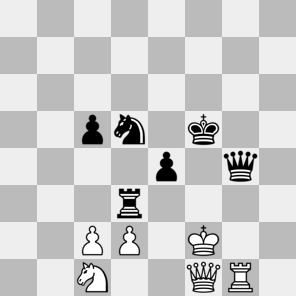 I do not claim to be an expert here, but I am fairly sure that this position did not actually occur in the match. The kid who purportedly plays Kasparov is no expert either:

This awe-inspiring command apparently indicates the unlikely move Nc3. It only gets worse from there:

Realism: -/5 It’s not even a chess position. If we interpret what we see as the visible part of an 8×8 board, the realism score would be 1/5, I guess, since the result would not technically be impossible.

Probable winner: Deep Blue. Admittedly he cheated, but so did Kasparov. Plus, historical accuracy demands that we give deep blue something.5