By: Nikolaas VerhulstPosted on November 28, 2017

While we’re on the topic of advertisement for drinks featuring chess, let’s talk about Red Bull. It is a relatively new drink, launched in Austria in 1987, but has conquered the world of energy drinks in record time.1 The brand is now worth billions, and the company sponsors sports teams from everything between Formula 1 and soccer. The slogan “Red Bull gives you wings” is one of the most recognisable in the world and is based on the idea that partaking of this beverage will increase your vitality and speed.2 This is also the idea behind their chess-themes ad, which claims it will help you beat a robot. At least, that’s what it looks like at first glance.

They’re playing in a very strange setting: they seem to be right in front of a door, with an unidentifiable machine on the left, a desktop computer on the right and what seem to be a bunch of pistons behind it. My best guess is that the guy on the right is supposed to have invented the one on the left and that this modern Prometheus is testing his creation’s capabilities in his lab.

Obviously, this is a very cartoonish drawing and I’m not sure what the exact position is. The king’s side seems strangely underpopulated, probably because it is visually less important. The small number of pieces on the side of the board suggest that there should be many more pieces, but it’s plainly visible that there’s nothing to the right of the white king. This is my best reconstruction:3 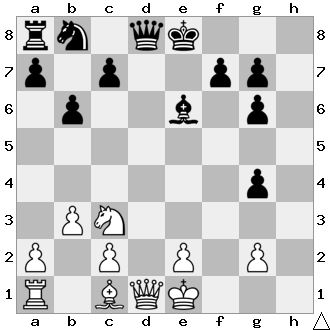 I don’t think any halfway decent engine would ever end up in such a position. Indeed, the rest of the advertisement makes it perfectly clear that the cyborg is better at talking smack than at playing chess. In the above position, his human opponent plays Nb5, after which the mechanical monologue below ensues. I have added the moves where they were played; as can plainly be seen, both players are really fast. This must be a blitz game:

Cyborg: You don have a chance against me. (c5) I can calculate ninety (Ba4) trillion (a5) moves in advance.4

Here, the human cracks a can of Red Bull.

The takeaway is supposed to be that drinking Red Bull gives an undue advantage to the human, but I don’t buy it. You see, I did not make a typo there, white really played Bc1-a4. In the heat of the moment, the robot immediately makes his next move and only then, when he cannot make a claim any more, does he notice something is awry.

Realism: 0/5 The left side of the board seems quite reasonable, the right side is ridiculous. Ba4 is illegal and seals the zero out of five verdict.

Probable winner: Cyrano. The robot was up two pawns, but just got swindled out of his rook.

1. [Exactly where the name comes from is not clear. A connection with the red heifer is not ruled out.]↩
2. [But Red Bull does not actually give you wings, as per an American court ruling.]↩
3. [Made in my own lab, without pistons, but with a computer.]↩
4. [Of course, since 2014, chess games cannot continue for ninety trillion moves, but I strongly suspect that this ad was released before that.]↩