By: Nikolaas VerhulstPosted on December 5, 2017

Last week we talked about Red Bull, this week we’re tackling its cinematic counterpart: Roland Emmerich’s 1996 movie Independence day – which revived the disaster movie genre as a viable option for summer blockbusters – is  hugely popular, full of action, and probably not very good for you. At least, that’s what I gather from the buzz around it, for I have never seen it. Apparently, it’s a rather standard action movie, without much depth but with some non-zero entertainment value. I suspect that the most entertainment can be derived from the chess scene, which pits David Levinson (Jeff Goldblum) against his father (Judd Hirsch).1 Let’s have a look:

There’s surprisingly little circumstantial stuff I can moan about. The board is set up correctly, even the coordinates are shown correctly. They’re playing without clock, so there is no false flag operations. Even the place they’re playing in, a park in which some chess tables are set up, seems perfectly reasonable. No, I’m afraid I’m reduced to complaining about the position.

So, with a disappointed grunt, I turn to the following diagram:2 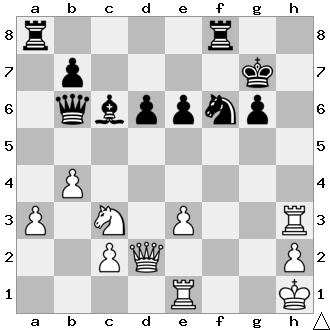 Here, there is plenty to talk about. The situation is dire for white: not only is he in chess, but he has dropped a bishop as well.1 After a long think, he decides to play e4. It’s not a good move, but it can’t spoil much anymore. For his opponent, there are many roads to victory. He could play Rh8, for example, or he could brazenly capture on a3. Certainly he shouldn’t lose this. But black, er, finds a way.

He plays e5 without a moment’s thought. Even worse, after the obvious Qh6+, he plays Kg8, which is an unbelievably stupid move. The type of move which players have played a few hours before being found hanged by their own shoelaces and overdosed on painkillers. The sort of move that makes you lose your faith in humanity. Of course, white answers Qxg6 mate. Maybe the aliens should have won.

Realism: 3/5 In a blitz game between two bad players – and that’s clearly the situation at hand – I could very well see a position like this arising.

1. [Writing an actor’s name in brackets after the name of the character he’s playing is the true sign of professionalism.]↩
2. [Made with a budget of 75 seconds.]↩
3. [And he didn’t pick it up in 5 seconds!]↩