Mystery science theater 30001 might just be my favourite television show ever. As far as I’m aware, it only ever aired in the United States, so I’m guessing most readers are not familiar with it. The basic premise of the show is simple: making fun of really bad films is amusing. MST3K, as the show is abbreviated by its loving fans, is about a guy who has been shot into space by a mad scientist in order to be subjected to really cheesy B-movies. Together with, Crow T. Robot and Tom servo – two robots he build to keep him company – he tries to hang on to his sanity by making fun of such cinematic masterpieces as Eegah, The incredibly strange creatures who stopped living and became mixed-up zombies, or The magical voyage of Sinbad. 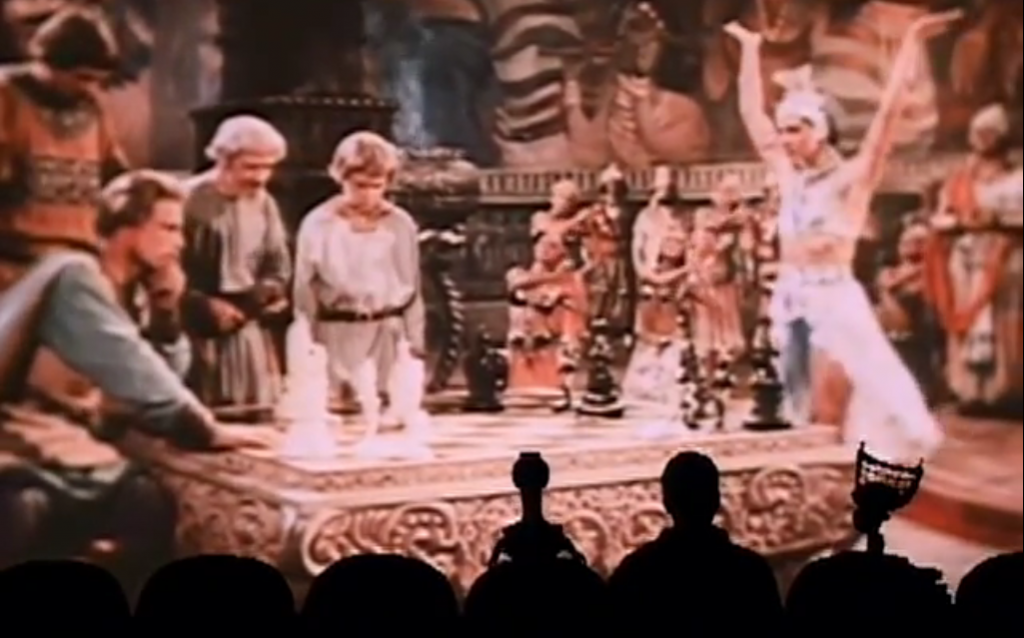 Before I go on, there is an obvious question I have to answer. Why the #&%! did I not just talk about The magical voyage of Sinbad instead of theMST3K episode? The answer is twofold: firstly, I want to spread the MST3K word. Secondly, I stumbled on the movie while watching the episode.

The name of the movie’s protagonist is obviously inspired by Scheherazade’s Sinbad stories from 1001 nights, but don’t let that fool you: it’s a completely Russian effort, based on Rimsky-Korsakov opera Sadko. Sinbad – the chap on the left in the picture above – goes on a quest to find a bird which, he hopes, can make the citizens of Copasand happy again.2 After enough adventures to make it a standard length movie, he meets some king or other who apparently keeps said bird in his treasury. Personally, I don’t buy it – the king looks far too grumpy for someone who has happiness on call – but Sinbad is completely convinced. They decide to play a game of chess for ownership of the bird. That’s where things get interesting for us.

The game is not treated with the dignity and gravitas warranted by the stake of a happiness-inducing bird. There is no clock, both players confer with some of their respective henchmen, and – as keystone in the ogive – there is a woman dancing around the board after every move. The position seems to be the following:3 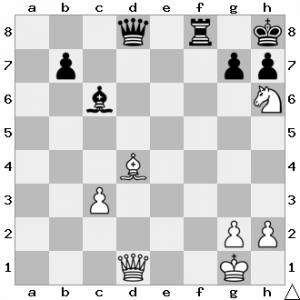 Things are looking bleak for Sinbad. He is down an exchange without any clear compensation, but if you take a good look at the upper right corner of the board it’s not hard to guess what’s going to happen. White plays Qb3, black replies with Qe7.

Sinbad jumps up, looks at the board for a moment, and plays Be5. Black carelessly takes the offered gift, running into Qg8+.

Of course, black is done for now. He has no choice but to capture the queen with his rook and gets mated by Nf7. Thereby, Sinbad wins his bird and the movie as well as the episode can wrap up.

A first glance, this might seem like a nice trick, but it’s really not that impressive. Only with Qxe5 did black blunder away a relatively straightforward victory. More’s the pity, since white threw away his victory on the very first move. In fact, he has a pretty little combination in the position above. Can you find it?5 At least you can click on the 5 to go to the footnote with the solution. No, not that 5, the one before. Yes, that one. Or you could just scroll down, I guess.

Realism: 4/5 The position seems realistic enough. The only weird thing is that the smothered mate is telegraphed from miles away, but black doesn’t see it coming.

Probable winner: Sinbad. He got the bird.