CIPC #31: The unbearable lightness of being

It is a truth universally acknowledged, that every single book with good reviews, must be in want of a movie version. Hence, with the inevitability of a parakeet going tweet, the unbearable lightness of being was made into a film. The book is by Czech-French author Kundera,1 the movie is not. Instead, it was directed by Kaufman and come into (unbearably light) being in 1988.  Rather close to the beginning of the film we see the protagonist in a swimming pool. As is apparently not uncommon in eastern Europe, some people are playing chess in the water: 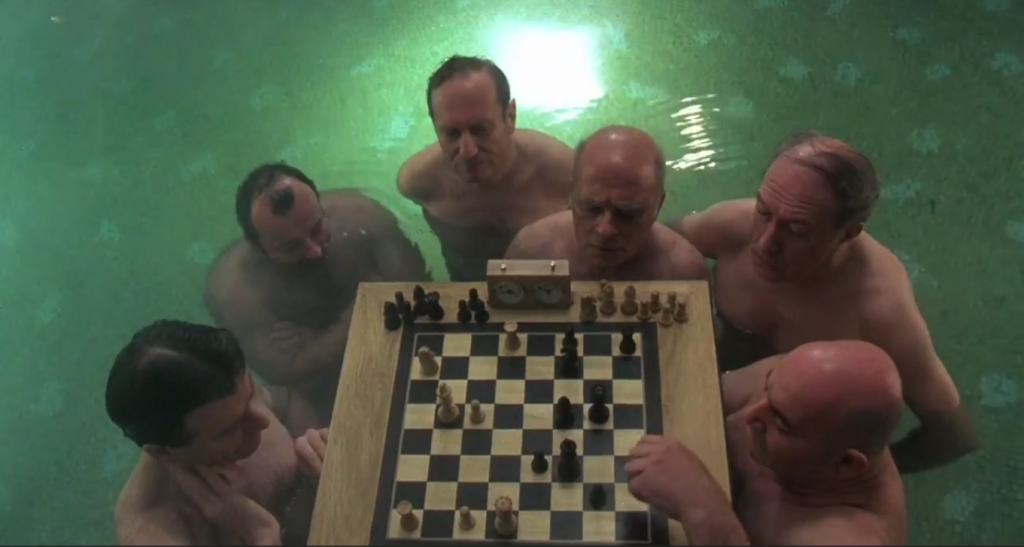 Black, who is down an exchange and a full head of hair with only a pawn for compensation, has to parry the check. He plays g5, white answers Qd4+ to which black replies Be5. At this point, a woman dives in the pool and the resulting waves throw over the black king.2 Black places his king back on g6. Our protagonist – and therefore also the cameraman – gets distracted by the diver and leaves the board to catch her after a shower. Normally, I’d get all in a huff about someone leaving a game of chess for mere frivolities like human interaction, but here it is warranted: the position is so clearly lost for black that there’s not much reason to keep watching.

Still, the whole point of this blog is judging, as far as possible, the positions that appear on screen, so we have to keep watching for at least a little while longer. Here is the position:3 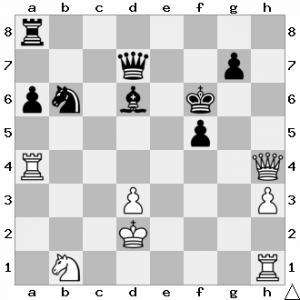 I think this is the sort of position a layman would judge as quite realistic, but it’s really not. Kings should not be on f6 or d2 if there are still so many pieces left.  How come white’s d-pawn is still on the board, let alone on d3 of all squares? Why are two rooks and a knight – 20% of the remaining pieces, and that’s counting pawns! – still undeveloped? Why did she leave the water so soon?

Seriously, she dives in, swims five meters to the side of the pool and gets out again. What’s the point?4 Is there some health fad going around that swimming for half a minute a day keeps wrinkles away?5

Oh, one more thing: the hands on the chess clock aren’t compatible with this being a blitz game, so why are they playing so fast?

Realism: 2/5 I have already outlined my concerns. I think they are convincing.

Probable winner: White. He’s already up an exchange, the knight on b6 is going to fall – Black’s being will not be unbearable light much longer.