I have a confession to make: I know squat about American comics. Especially about superhero comics. Of course, there’s a lot of chess in them, just because there’s such an enormous quantity of magazines and issues, but they just seem so silly to me. It’s not a very original objection, for sure, but it seems to be a valid one. Why are they all wearing these ridiculous spandex suits? What’s with the strange adoption of both Norse and Greek legends? Someone gets bitten by a radioactive spider and as a result he shoots webs from his wrists? What?! The one person who escapes most of my criticisms is Batman and today we’ll have a look at one of his earlier issues, which features a chess game on the cover. 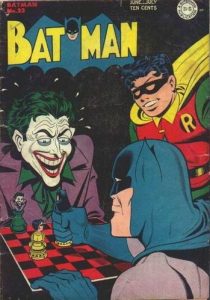 The cover drawing is done by a certain Bob Kane and the fact that I had not heard of him before starting this post tells you everything you need to know about my superhero comic knowledge. Apparently, he’s something of a legend. I don’t know whether this picture is one of his better ones, but if it is I’m not too impressed. Where are they? In the void? In a black hole? But how are Batman, the Joker, and Robin lighted then? What is the chessboard standing on, for that matter? It must be something, for the Joker’s nether parts are invisible, but what? Pure obsidian?

There is also the question of which piece is which. It seems clear that there are only three pieces on the board. Clearly, the Joker must be the king, and it seems logical that Batman is also a king, but what kind of piece is Robin? If he is a rook or a queen,1 the joker is in check and Batman shouldn’t be touching himself.2 If he’s a knight3 or a bishop, a draw seems inevitable. Finally, if he is a pawn, we get the following position:4 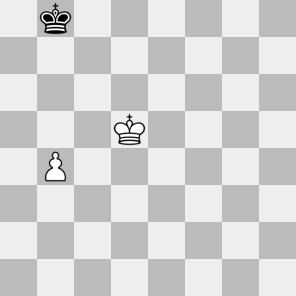 Here, too, the Joker’s worried grimace does not seem justified. If he simply  steps to the seventh rank, a draw is again in reach. I would say that Kb7 is probably the easiest, taking the opposition, which white can only regain by moving his pawn – and thereby forfeiting his winning chances.

So why the strange face? I think I know: the Joker has just realised that the pieces are horrible realistic and that he is, in fact, cut of at the abdomen.

Realism: 5/5 This very position must have arisen countless times. It’s a very typical endgame position where white might play on a few more moves, hoping for a blunder by black.

Probable winner: None. Which might actually be a first for this series.