CIPC #69: The hound of the Baskervilles

Long, long time ago, when I started this blog, I already knew that, inevitably, I would end up talking about Sherlock Holmes. I don’t think there is any mention of him playing chess in the original stories,1 but he’s a detective. If the viewers have to believe that he’s a detective, you have to show that he’s smart – and if you want to show someone is smart, you show him playing chess. Today the day has finally come to face my unavoidable destiny and tackle the world’s most famous detective. We meet him in the 1959 version of The hound of the Baskervilles, being played by Peter Cushing and in turn playing the white pieces against no-one in particular. 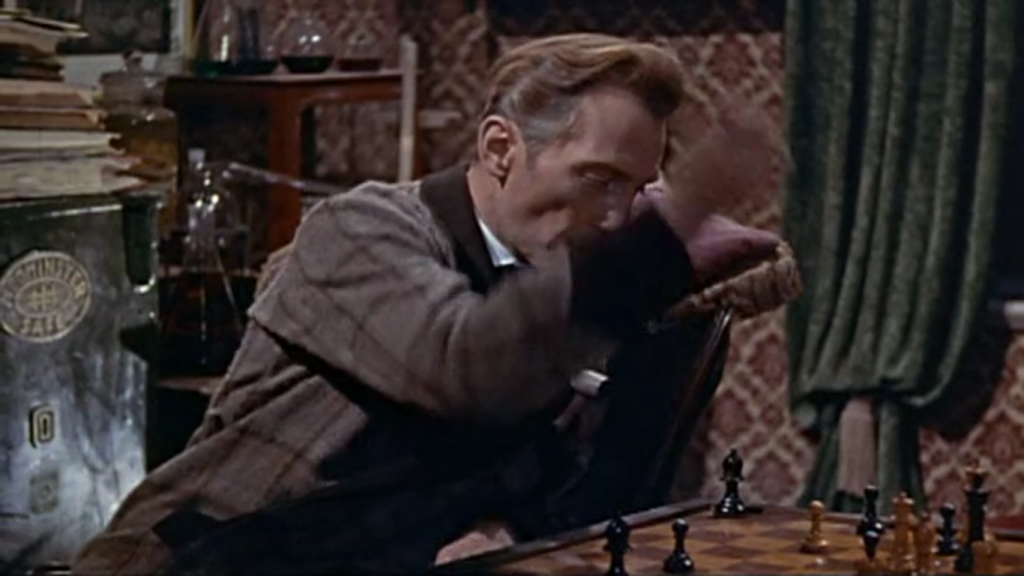 For those who don’t know the story: Holmes is called upon to protect Sir Henry Baskerville, who is thought to be in danger after his uncle, from whom he inherits, died under strange circumstances possibly related to an old folk tale about a curse on the family. At first, Holmes can’t believe Sir Henry is in any real danger, as he is played by Christopher Lee, so instead he concentrates on chess. And this is where things get awkward.

The hound of the Baskervilles is one of the most critically acclaimed Hammer movies and it’s easy to see why. The cinematography has the typical Hammer atmosphere. Quite some liberties have been taken with the source material, but the adaptation is more than adequate. The cast is great: Cushing is a very convincing Holmes, and Lee makes for a highly charming Sir Henry.2 But the chess board is set up wrong! Holmes has a white square on his left hand and he is not looking on from the side, as there would then be a pawn on the first rank. Correcting this horrible mistake, we find the following position:3 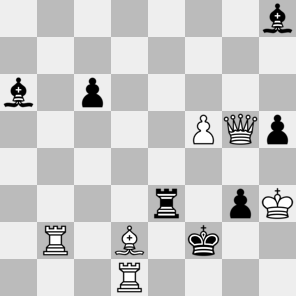 After an ‘Aha!’, Holmes plays Qxe3#. It’s mate, yes, but nevertheless this move does not warrant such a jubilant reception: it is simply too obvious. Less obvious is how this position came about. What could black’s last move have been if it was not outrageously stupid? Clearly, the mate in one must have been unavoidable. This means in particular that Ke2 could not have been a legal move, as this would sidestep the immediate mate. Hence a white piece must have been attacking e2 and black’s last move must have been taking it. I see the following options:

However, there is another small technicality to deal with: it’s possible that a black piece was blocking e2. If it was the bishop, the mate could again have been avoided for the moment. If it was the rook, Rxd2 would have prolonged the game. Unless black was in check by a bishop or queen from e3. Whence we can finally conclude that a piece must have promoted.

Strange, indeed, but once you eliminate the impossible, whatever remains, however improbable, must be the truth.

1. [The Smullyan stories are original as well, but in a different sense of the word.]↩
2. [André Morell, playing Watson, is a fun guy, too.]↩
3. [With help from the Bakerstreet Brigade.]↩