Tarantino syndrome is a disease which has been affecting many young movies, often with a great pedigree, for decades now. A textbook case is offered by the hateful eight.1 At first, all is going well: the acting is great, the music is masterful,2 the cinematography is gorgeous – everything looks very promising. Then, all of a sudden, madness strikes. The whole thing derails spectacularly, gore and blood starts flying everywhere, and any semblance of immersion goes out of the window. Of course, in this case there are some complications, in that the fervent, chipper CIPCers were already out of the movie when the following appeared on screen:

This showcases another widespread condition in films: a lack of focus on the chess boards. This condition is, of course, far more widespread than Tarantino syndrome. In fact, it is so common that it must be considered the default and that it should be expected to be present when treating Tarantino syndrome. If so, one must of course deal with it first, so let’s do that.

Or try, at least. See, it’s a really bad case. The board itself is rather small and, to complicate the operation, some captured pieces seem to have been put on the rim, but it’s not immediately clear which ones. The following image is the best I can do:3 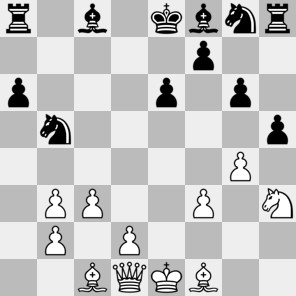 Everything here is pretty much conjecture, though. Black’s queenside is relatively certain, but that’s about it. Of course, the pieces had to be placed in such a way that there’s room for the candle, which is probably the reason for the unlikely configuration.

I don’t know who the players are. Sure, the guy sitting on the left is general Smithers4 (Bruce Dern) and the one on the right is Oswaldo Mobray (Tim Roth), but in view of the aforementioned candle it seems very likely that the players abandoned their game a while ago. Whoever they were, they delayed development, didn’t guard the centre, pushed pawns willy-nilly – in short: they left a bloody mess. Typical of Tarantino syndrome.

Realism: 2/5 Well, I guess it’s not too hard to reach the above position, so maybe that’s worth something?

Probable winner: Black has the better chances, I guess, but more likely is that everybody dies in a huge puddle of blood.

1. [This is sometimes stylised the hateful 8, but that to me suggest a rampaging number. Which admittedly would be an awesome idea for a movie.]↩
2. [Morricone somehow manages to derive half his score from two notes by the contrabassoon – possibly the most impressive achievement in cinema music.]↩
3. [Director of photography: this guy.]↩
4. [Who, of course, is sitting on the white side!]↩