From all the sports in the world, boxing is the most mystifying to me. I just cannot picture any decent person answering the question ‘what do you do for fun?’ with ‘I punch people in the face.’1 On top of that, boxing is the complete antithesis of chess, which makes its appeal even more mystifying. Still, for some reason people like to watch boxing and to give it a bit more class, they like to combine it with our royal game. Chess-boxing was a thing for a few years and for the third movie in the Rocky series, the following publicity shot was apparently released,2 possibly inspired by the Karpov-Korchnoi matches. It was pointed out to me ages ago, but for some reason I forgot about it. Sorry! 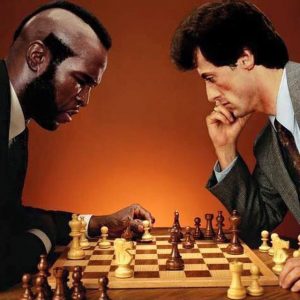 Clubber Lang (Mr T.3) is leading the white pieces against Rocky Balboa (Sylvester Stallone) for unknown reasons in an undisclosed location at an unspecified moment. The background is disturbingly vacant and appears to be lit by a sun which is about to rise over the board.

There is no clock, so it’s probably a friendly game. To some extent, but certainly a small one, this excuses the fact that Rocky has been centring his pieces very badly. Especially the rook on a8 is of kilter and seems to be planning on invading pawn a7’s space.

The view of the board is perfectly clear. The position is as follows:4 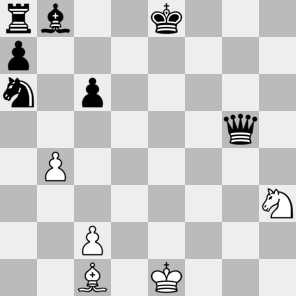 Mr T. is holding the b4 pawn in his hand. He probably has just captured a bishop or queen on b4, for otherwise he obviously should have taken the queen on g5. But if he did take a queen or bishop on b7, then black must have promoted a pawn at some point, all while keeping his rook buried on a8.

Plus, what’s with the kings? For some reason, whoever is responsible for these positions I dissect often seems to leave them on their original square, while in reality they’re likely to be evacuated early on in the game. I can only assume all these positions were thought up on the same board, which has the kings glued to e1 and e8 respectively.

Realism: 1/5 As is so often the case, there is no rhyme or reason behind the positioning of the pieces.

Probable winner: Rocky Balboa, not only is it in continuity, but he’s also a queen and a rook up.

1. [But maybe boxers are generally not decent people.]↩
2. [I have not been able to find an original source. Can anyone help?]↩
3. [Which is a pseudonym of Lawrence Tureaud. Should I write Clubber Lang (Mr T. [Lawrence Tureaud])? I don’t know the policy here…]↩
4. [I pity the tool.]↩