Who’s the greatest cowboy in popular culture? John Wayne, maybe? Clint Eastwood? Jonah Hex? If you ask me, the correct answer is Lucky Luke. Introduced by Morris in 1946, he has become one of the most popular and recognisable figures in Franco-Belgian comics. He’s semi-officially known as “the man who shoots faster than his own shadow”1 and he is indeed an amazing gunslinger, but there’s much more to him than that: he’s smart, strong, and resourceful. Plus, he’s got the coolest horse ever. 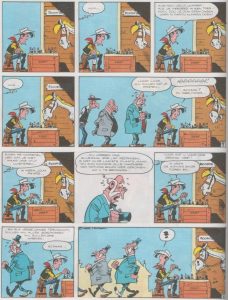 The story, which is volume 35 in the series,2 is about Jesse James who, in the Lucky Luke universe, is a failed Robin Hood terrorising Nothing Gulch with his gang. Luke has captured one member of the band, but the town officials have let him go because they’re afraid of Jesse’s revenge. Filled with contempt at this cowardice, he leaves them to rot and goes off to play chess with his horse instead. Yes, his horse is that cool. He – I refuse to call him ‘it’ – is called Jolly Jumper, and a worthy companion to his cowboy. Although, apparently, he plays chess quite slowly.

This is were I normally would put a nice diagram with some slightly witty quip, but I can’t. We only get to see the board from the side and all pieces seem to be white. So what can I do? I could translate the text, but there’s just too much of it. The gist is that the villagers have come to apologise and rectify their behaviour. I do want to translate the dialogue between Luke and Jolly, though;

Lucky Luke: Come on, Jolly Jumper! If you participated in a tournament, you wouldn’t be able to take days for a move either.

Lucky Luke: Check? Oh, not at all.

Lucky Luke: I take your knight, I take the king and the rook and…

Two remarks: first, the Dutch word for knight means ‘horse’, which explains why Jolly Jumper seems so distressed at the prospect of his knight being taken. Second, Luke’s going to take the king?! Is his intelligence just a ruse? Or his kindness? Is this what the world has come to? Have we no heroes anymore?

Realism: ?/5 Seriously, how should I know?

1. [Which technically is true for anyone, since there is a speed-of-light delay between one’s own movement and that of one’s shadow.]↩
2. [Or perhaps number 4. The 36th on the official website.]↩