In the seventies, all bets were off. The oddest, most far-fetched ideas were realised. Weird novelties, like the Bond Bug and the Disco Duck were released and inexplicably found interested customers. But the weirdest thing is that, apparently, radios did not come standard with a built-in chessboard. Clearly an untenable state of things, which was finally challenged by JVC, when it introduced this beauty to the world.1

Of course, when introducing a revolutionary new product like this, you want to make a good first impression on your potential clientele. In this case, the target audience must surely have been chess enthusiasts. It therefore stands to reason that the people at JVC would do their damnedest to get a decent position on the board. Did they? Well…2

The reconstruction posed no very serious difficulties. It does, however, pose some hilarious problems.3 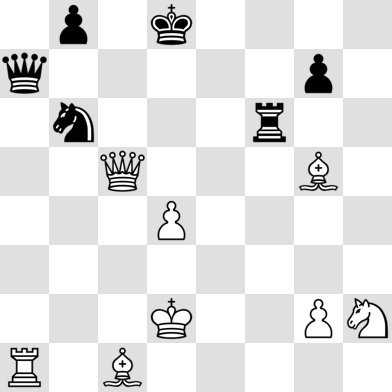 Also, the claim that “you can play this radio even when it’s not playing” is highly dubious. Given the early seventies release date, it seems highly implausible that this radio itself plays chess. Possibly, the people making this ad were Just Very Confused.

Realism: -/5 There is no realism. There is only ridiculousness and pain.

Probable winner: White is up a lot of material. His main threat is that the rogue black pawn decides it has reached the eighth rank and must therefore be able to promote.

1. [I must admit that I’m not wholly sure that ever happened. I have found this one image online, but know no more. Then again, it may not have met with thunderous success.] ↩
2. [It’s also relevant with a different interpunction: “Did they well?”] ↩
3. [You have difficulties making nice diagrams? Ha ha ha.] ↩