Before I ever laid eyes on any episode of the Adam West Batman series from the sixties, I had this idea, gotten through sheer cultural osmosis, that it was extremely silly. I had the idea that it was filled with fisticuffs accompanied by cartoony sound effects; that there were bombs that, some days, you just couldn’t get rid off; that it was filled with people in ridiculous and unpractical costumes. What I did not get is that it was surprisingly dark and even a bit unpleasant.

For example, the Riddler’s plan in this episode is not to steal a boatload of money or some priceless jewellery, or even to just cause some mischief and mayhem, but rather to torture and murder Batman and Robin. Even worse is the chess scene.

It happens at the beginning, right before Batman and Robin get involved in the plot. At this moment, they are still Bruce Wayne and Dick Grayson rather than their becaped alter egos. Look what they have on their board:1 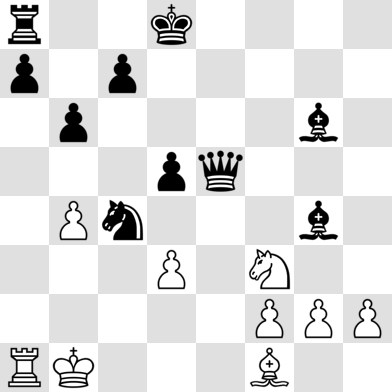 I now understand why the Riddler wants to kill them. What the hell have they been doing? What happened to the rook on h1? Did the f1 bishop sidestep for a moment so it could leave? Did a knight come all the way down to g3 to gobble it up? Why where black’s king’s side pawns massacred? More importantly, why did black promote to a bishop?2 And what did white do while that was happening? Luckily, Batman puts his adversary out of his misery by going Qb2. Probably he had just been toying with him.

I don’t think I’d like to live in the Gotham city. The sky-high crime rate is one thing, but people playing chess like this is just too much.

Realism: 1/5 It is not illegal. Maybe it should be.

1. [Holy diagram editor, Batman.] ↩
2. [It’s an unpopular career choice, nowadays.] ↩
3. [This is biologically unsound. Should a ‘biology in popular culture’ blog exist, this could be material for them. If they were particularly desperate.] ↩