Every now and then,1 I spotlight an ad on this blog. Today, I’ll write one. It’s going to be an ad for the Max Euwe Centrum in Amsterdam; a small museum about chess, with a valuable library and helpful staff, all in a very central location in the capital of The Netherlands. There is even a big chessboard right outside of it and it is this chessboard which the the excuse for this (unpaid) advertisement: it appears in the background of a Bollywood film from 2004.

I didn’t watch the movie. It looks like one of those useless romantic comedies where uninteresting people get into astonishingly stupid misunderstandings because of contrived plot points and the inability of the protagonists to stop and reflect for nought point four of a femtosecond. But, hey, it might be good. (Though obviously not as good as the Max Euwe Centrum.)

The truth is that I don’t care. I just want to know what’s on the board. Unfortunately, one of the trappings of the romantic comedy genre, as far as I’ve seen, is that a disproportionate amount of time is spent on the human characters, rather than the chessmen. So, too, here. Two people singing some nonsense get all the attention and the quiet dignity of the board is ignored. We don’t even get to see all of it. Humph. In the Max Euwe Centrum, you’d get to see the whole board.2 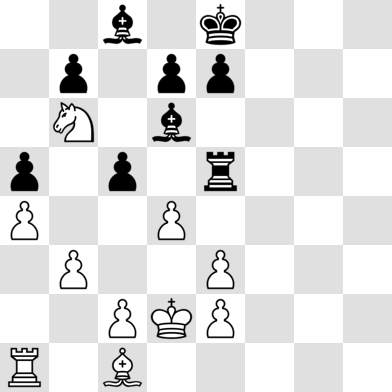 This is the bit we do get to see here. The reconstruction comes from an overhead shot, so the identity of the pieces might not be one hundred percent accurate. But it doesn’t matter. It is abundantly clear that someone has been horribly desecrating our noble game, right on the Euwe square in the master’s home city. And instead of warning the authorities, these people just film it and sing some bollocks.

That’s the problem with Amsterdam: the damn tourists ruin it for everyone.3 At least there’s still the Max Euwe Centrum.

Realism: 2/5 No piece is too far off from where it should be, but very few pieces are exactly where they should be.

Probable winner: Who knows? Clearly, white is threatening both the e5 rook and the c8 bishop, but god knows what’s happening on the king’s side.