When you think of comics, you probably think about American superhero comics, Japanese manga, or perhaps the Franco-Belgian bandes dessinées. You probably don’t think of the Italian fumetti. But there are a few. The flagships are probably Dylan Dog, the nightmare detective, anti-hero Diabolik, and Corto Maltese, once published in Tintin magazine. But there is also Rat-Man.1 It started in 1989 and is still running.

But here it’s sitting at a chessboard, not running at all. A very smart move! I’m starting to like this rodent. On the other hand,2 he has set up the board wrongly. I’ve stopped liking this rodent. All the more because he’s philosophising; that’s never a good sign.

The reconstruction of the position was seriously hampered by murine carelessness in the positioning of the pieces. Not surprising, if even positioning the board is too difficult.3 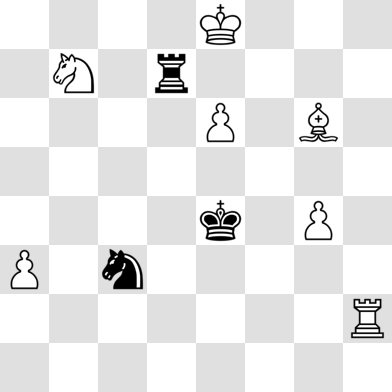 This is my best attempt at a reconstruction, but for example the pawn on g4 may just as well be on g3, f3, or f4. I’m also not entirely sure where white started and where black. I think it is as displayed in the diagram, since our protagonist can be seen moving a black piece and he’s on the top side.

This explains why he’s looking a bit dejected, because things are not looking bright for black. He is down a bishop and three pawns and his rook is seriously threatened. For a comic, that’s not good.4

Realism: 3/5 This could be something that happens in a low-level game that has continued for too long. Probably, white just took on e6; possibly a rook or a piece that was protecting the d7 rook.