This is a bit of a rarity: a talk show! Yes, Ivo op zondag (Ivo on Sunday) is a Dutch television program in which the apparently famous Ivo Reihe talks for an hour or so with a couple of apparently famous guests. The talking takes place in a studio which is decorated like a very slick and futuristic living room. In this living room, there is very slick and futuristic looking chess set. As far as I can ascertain, the pieces are usually in the starting position. But such was not the case in the very first episode of March this year.1

If the picture above were the only thing to go on, I wouldn’t go at all. But when Ivo enters the room, he has a book in hand that he places next to the board. On that occasion, we get a decent glance at the position.

The reconstruction posed no real problems, with the possible exception of identifying the pieces. For some reason, the pawns are little houses, most other pieces are towers and skyscrapers of various forms, while the knights, as the most capricious of the pieces, ate depicted by Ferris wheels.2 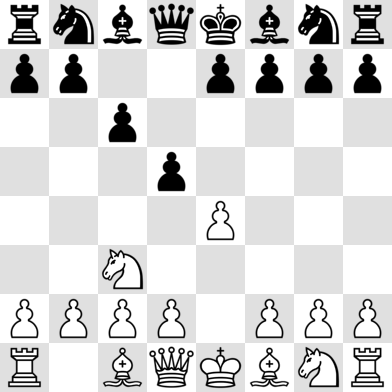 It seems like Ivo knows a thing or two about chess. This is a perfectly normal position, which probably arose after 1.e4 c6 2. Nc3 d5 although a few transpositions are possible.

Perhaps you are now wondering why I am talking about this at all. It’s a perfectly ordinary position, there is no interesting story around it, and it appears only for a very brief moment on screen. The reason you are reading about it is that I thought, at first glance, that f3 had been played instead of e4. That would have made for a good story, and I could have raved to my heart’s content about incompetence being broadcast on publicly funded media. But it wasn’t true. Now I have to shamefacedly rave about incompetence being broadcast on private chess blogs.

Realism: 5/5 Not only did this occur in many actual games, it occurred in some of my games.

Probable winner: This could go either way – or no way at all. It’s too early to tell.