When Saw came out in 2004, it inspired a wide array of horror and thriller movies of wildly varying quality. One of them, with a surprising mathematical theme, is La habitación de Fermat (Fermat’s room), a Spanish effort released in 2007. The plot is simple: four mathematicians are locked in a locked room which is quite literally closing in on them.1 They have to solve all sorts of riddles in a given time, to stop the walls moving. But before all of that happens, just a few minutes into the film, the oldest of them can be spotted at a nice game of chess.

As is far too often the case, the camera focuses more on the players than on the games. Considering our usual fare on this blog, that was probably a good move on the part of the director. Can the actor find an even better one?

I’m not a hundred percent confident about the following reconstruction. Especially on the king’s side it might be quite a bit off:2 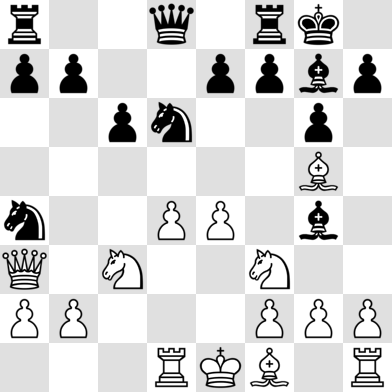 The players start rattling of chess moves at an alarming speed. Black, our man, is apparently to move. He eliminates the knight on c3 (Nxc3), and after the obvious recapture (bxc3) he snaps of an important central pawn (Nxe4). This leaves the pawn on e7 hanging and white does not hesitate to take it (Bxe7). So far, this makes sense.

No further though. Our man gets up here to get some document and says he moves his f8 rook to e8. Because, apparently, in no time short, the black queen had moved to b6, his e4 knight is now on c3, and the dark-squared white bishop had made its way to c5. When did that happen? And why do they not shown it? Surely that would have been more interesting than most of the puzzles they do show.3

Realism: 3/5 It is hard to suggest a plausible last move, but at least no pieces are on utterly ridiculous squares.

Probable winner: Hard to say, as apparently these pieces have the ability to move between moves.

1. [They have all been assigned pseudonyms: Fermat, Galois, Hilbert, Pascal, — and Oliva. Who the hell is Oliva? Some kind of renaissance philosopher, apparently, who presumably philosophised some philosophy. This is a real arson, murder and jaywalking case.] ↩
2. [If you are ever caught in a room where the walls come in to crush you unless you make a nice diagram, use this.] ↩
3. [To be fair, even this blog is more interesting than some of these puzzles.] ↩