It started all the way back in 1923 and, since then, Time after Time has come out.1 It is probably the most well-known weekly magazine internationally and when it announces its Person of the year award it usually makes the news. But arguably the greatest moment came in the July 5th, 1937 issue. Someone at the Metropolitan Life Insurance Company decided they should run some advertisement in the magazine. Someone, maybe the same person, decided on a chess theme.

The result of that glorious decision can be seen above. On top, two men, at least one of whom bespectacled, are playing chess.Underneath there is a lot of babble, at best strenuously connected to chess, aimed, but badly, at selling you life insurance.

We don’t see most of the board, but the part we do see is crystal clear and easily reconstructed:2 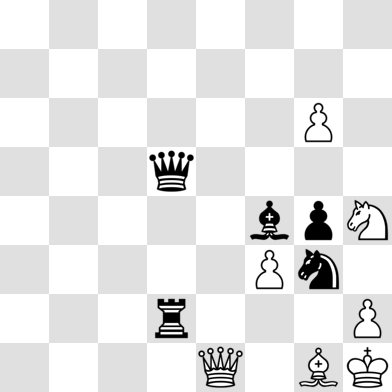 White is to move, and he is reaching for his h pawn. “Surely,” I hear you think “you can find no fault with that.” And I don’t. Barring the obviously stupid Qxg3, the h pawn is the only piece which has a legal move.

However, I do find it puzzling that the black player’s silhouette shows him resting his chin in his hand. This is a rare gesture for someone who has just made a move. And if he has not just made a move, white didn’t reply instantaneously. And that’s weird.3

Realism: 3/5 I have some doubts about the construction with the white pawn on g6 and the black one on g4, but nothing seems majorly out of place.

Probable winner: Who knows? The fact that we only see one corner of the board makes it impossible to say. It seems like hxg Be3 with the idea of Rd1 is a huge threat, but the pieces on the rest of the board could change that verdict dramatically.

1. [I leave it as an easy exercise for the interested reader to play around with capitalisation and punctuation to change this sentence’s meaning.] ↩
2. [Now for sale: insurance against bad diagrams.] ↩
3. [And therefore entirely unlike maintaining a blog about chess in popular culture.] ↩