It’s been several months time since we last talked about a movie. So let’s do something about that. Our subject today, The rebel set, is an obscure release from 1959. It is barely a feature length film and none of the actors are particularly well-known. The plot deals with a guy, a Mr. Tucker, who recruits a couple of beatniks to rob an armoured car and escape via train. The guy that comes up with the scheme is shown in the beginning of the movie playing chess. D’oh, he is the schemer, of course he plays chess.

Our mastermind is the chap on the left, looking confident and playing white. His opponent is a nobody who will disappear from the movie in less than no time. The guy with the hat is one of the henchmen involved in the robbery.1

The director has provided quite a close shot of the board — probably the greatest achievement in his life — but unfortunately this is not exactly a high def film. As far as I know, an armed robbery could be taking place on the queenside. I am fairly confident in the kingside, though, because that’s where the camera is:2 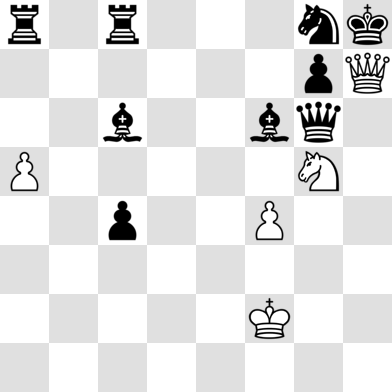 Ostensibly, white has just taken a pawn on h7. After an unreasonably long pause, black announces that he has to take the queen. No shit. He takes with the queen and immediately gets mated by Nf7. He pays his dues and leaves the movie. A wise decision.

Sidney: Don’t you ever lose one of them settoos?3

Tucker: Rarely if ever.

Sidney: Then you must be a virtuososo, as they say.

Tucker: Well, yes and no. I merely make sure that my antagonists are bad chess players.4

The man is a genius! Or he only surrounds himself with people who think he is.

Realism: 3/5 I would feel bad giving a lower grade, as I don’t know what’s going on on the queenside. On the kingside, there’s a rather pretty but not unheard of mate. However, white seems to have sacrificed an implausibly large amount of material.

Probable winner: White. And there’s nothing merely probable about it.