Sometimes,people ask me why I haven’t spotlighted the Harry Potter movie yet.1 After all, it is one of the most famous movie scenes in recent history. But the answer is clear: there’s no point. They consulted IM Jeremy Silman, who has written quite a long article about the position and hos he constructed it. For example, his article is on The Leaky Cauldron. But, perhaps surprisingly, the Lego Harry Potter game does not follow that template. And it’s not like the programmers didn’t know what happened in the movie: the game was released in 2010, the movie in 2001.

As Harry, Hermione, and Ron arrive, a game is well underway. Immediately, we notice that the canon has been abandoned. In the books as well as the movies, Professor McGonagall, who installed this chess room, is a noble and wise woman. In the game, on the contrary, h1 is a black square.

For once, my job as a reconstructor is very easy. Without a shadow of a doubt, the position is as follows:2 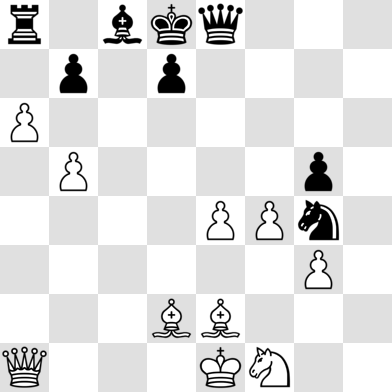 Okay, that looks weird enough. The fact that black has kept his bishop entombed on c8. The fact that his king and queen have swapped places. The fact that it is so obviously bollocks. Yet it gets weirder. Apparently, it’s black’s move and for some unfathomable reason he decides to play 1. … gxf4. This allows Ba5+ followed by Bxg4, but white instead recaptures on f4 with the pawn: 2. gxf4. There is one plausible reason: they’re playing bullet. This is compatible with the speed of the moves. I believe the time control is never quite made clear in the book, but Harry and his friends are trying to hurry past, so bullet would make sense.

This is not just a very bad game of chess, it is also wildly non-canonical. Ron is supposed to be one of the black knights and he is supposed to sacrifice himself to the white queen for checkmate. Here, he pointlessly sacrifices himself to a white knight while the white queen comes to an ignominious end at the hands of a bishop. And that sounds far too much like history.

Realism: 2/5 I can forgive quite bit due to it being — presumably — a bullet game, but how the black king and queen swapped places remains a mystery.

1. [Yes, sometimes people talk to me.] ↩
2. [Modulo the colours of the squares, but I don’t know whether you can change that in this diagram editor.] ↩