You are probably aware of Mission: Impossible, if only for the theme song or the Tom Cruise movies.1 It started as a tv series back in the sixties starring Peter Graves, who went on to win a Golden Globe award for his performance in 1971.2 In the same year, after one hundred and twenty four episodes, he finally got his real award: he got to play chess. He is infiltrating a fascist’s inner circles as a tutor for his grandson. In the meantime, he and his team are cleverly orchestrating fake paranormal experiences for the fascist, using drugs and hidden microphones.

While waiting for him to crack, Peter joins him in a game of chess. This game is not relevant to the plot, but very much to our interest. Luckily, the director has his priorities straight and we get a very nice, clear shot of the board.

I am therefore quite confident in my reconstruction, with the exception of black’s kingside, where it’s mission impossible:3 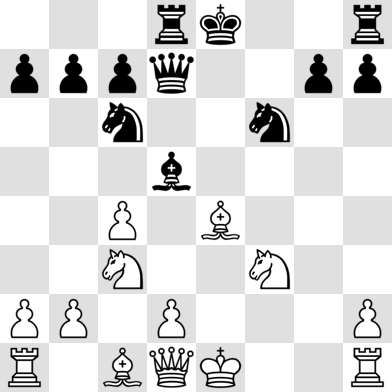 Obviously, white captures on d5. But he does so with the knight. Presumably because the mission would be too easy otherwise. But it’s still far from impossible. For a moment, black might think he can reduce the material deficit to just one piece with Nxe4, but Qe2 would be a very annoying reply. In particular because Qe6 — with the idea d3 Nc5 — would run very hard into Nxc7+.

So here, as everywhere else in this show, the mission turns out to be very much possible. Humbug, I tell you!

Realism: 2/5 It’s not an impossible position. In fact, the pieces are all in plausible positions. But, holistically, it doesn’t make sense.

Probable winner: White. He is up a lot of material. Admittedly, his king’s safety isn’t great, but neither is black’s.

1. [Or from high school chemistry: Miss ion? Impossible!] ↩
2. [He avoided the Flemish fields, as he was afraid he’d be marked by crosses, row on row.] ↩
3. [Making nice diagrams is no longer mission impossible.] ↩