Yes, I know, it’s just a couple of weeks ago that I wrote about Mystery Science Theater 3000, but no, that’s not a reason to not do so today. So get ready for some noggin conking, into space shooting, and weapons grade snark: here’s the satellite of love’s take on The dead talk back. It’s a fifties movie so bad it was only released in the nineties. It holds, at the time of writing, a glorious 1.8 out of 10 in the internet movie database. It was directed by a complete nobody and it stars no one.1 It is also of no importance to this blog post.

.In one of the segments with Mike and the bots, they are dressed up as The Grateful Dead and Crow launches into a very long and annoying guitar solo. Mike and Tom decide to pass the time playing a game of chess. An understandable, even laudable, decision which is rewarded by a place in the spotlight on this blog. People have done more for less!

For one, a8 is clearly a black square. These errors come in clusters apparently. For two, well, two is a lot harder already. The shot is reasonably clear, but I didn’t find a copy with a high enough resolution to be sure. The best I can do is this:2 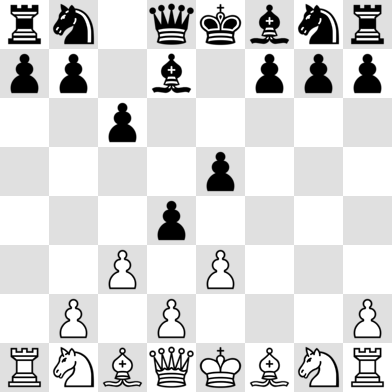 Yeah, I don’t know how white managed to lose those three pawns either. But he clearly did, because Mike is playing with them. He also did some other things wrong. Instead of developing a single piece, he has blocked them in as much as possible.

Possibly, this is a subtle nod to the fact that Mike, Tom, and Crow are blocked in on the satellite of love with no hope for escape.

Realism: 1/5 There is very little that’s realistic about this position. There is no earthly way white could have lost those pawns, unless this was a game with odds of three pawns. But even then, who gives three pawn odds? And why the a, f, and g-pawns?

Probable winner: Black. He has barely moved and he’s already up three pawns.