Once more, this blog is visited by Alan Davies. Last time, he was a corrupt quiz game host who got caught up in a murder. This time, he is on the other side of a mystery. He is playing Jonathan Creek in the BBC show  of the same name. His character is a magician’s assistant who lives in a windmill and gets involved when the bizarre turns up its, um, is that… well, I guess that would be its head?

I only saw this one episode1 of the show and I was not impressed at all. The acting is alright, but the plot is too contrived to be good and the dialogue isn’t very convincing either. But how about the chess? Around the halfway spot, there is a scene in which Jonathan’s sidekick is on the phone with him while playing a game against some other person who is otherwise as irrelevant to the plot as a purple chicken with wheels.

One thing the show is apparently good at is showing clear close ups of chess boards. As a consequence, I can show you a one hundred percent certain reconstruction for once:2 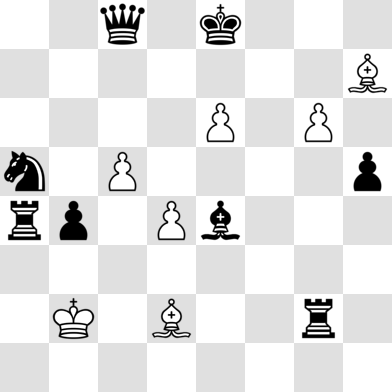 Black has just taken with his rook on g2. Jonathan’s sidekick, who is clearly not the sharpest knife in the drawer, has interposed with her bishop. Obviously, it is taken. In fact, it’s mate next move: Kc1 Nb3# leads to a pretty, almost economic mate.

Jonathan: How many men you’re down to?

Maddy: Four pawns and a bishop.

…but this definitely isn’t. The bishop, maybe, but no one dates pawns. But the most puzzling is yet to come:

Why? Sure, she only has four pawns and a bishop left, but if her opponent only got a knight, she’s doing just fine. But Jonathan probably knows his assistant is more stupid than the dull end of an egg3 and rightfully concludes that the game must have lasted long enough for her to lose all eleven pieces and that, therefore, her position must be hopeless.

So he hangs up the phone and goes back to sleep. Geba must still be taken.

Realism: 2/5 It’s hard to give points for such a position. It is ridiculous, of course, but once the material difference is so great, you can start doing ridiculous things.

Probable winner: Black. He has mate in one, is up a queen and then some, and his opponent has resigned. It doesn’t get more convincing than that.

1. [Which, I suspect, was entirely conceived after someone came up with the title and mistakenly thought it was clever.] ↩
2. [Without this diagram editor, I’d be up Jonathan Creek without a paddle.] ↩
3. [Presumably laid by the purple chicken with wheels.] ↩