I don’t know where this ad comes from, neither in space nor in time. The text and the company strongly suggest it must originate from the U.S.A., but even that I’m not completely sure of. I also don’t know what is happening here. For unclear reasons, a dish of — presumably reheated — frozen chicken breasts has been placed next to two people in the middle of a chess game and inexplicably mustard coloured clothing.1 None of the usual paraphernalia of a meal are in sight: no plates, no cutlery, no glasses; just one napkin, also mustard coloured. The older gentleman on the left seems just as puzzled by the whole situation as I am.

.And my puzzlement does not stop there. There’s the slogan for one. “You taste a priceless difference in Stouffer’s frozen cooked foods“?2 What does that mean? Or perhaps I should ask: does that mean anything? In order for a difference to exist, at least two objects are needed. Is the suggestion that different portions of Stouffer’s chicken breasts vary widely in quality? That’s a weird thing to brag about.

And then there’s the actual position. The guy is blocking the view of white’s king’s side, but there’s only two pieces of which the position is not a hundred percent sure: white’s g3 bishop and black’s rook…3 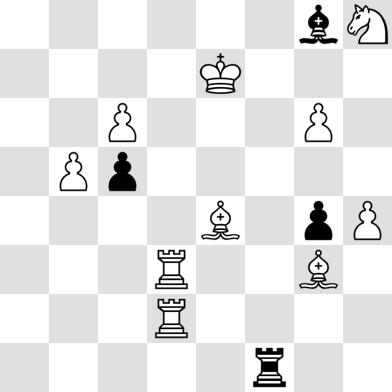 …which means that black is playing without a king. This is perhaps why she has been so exceedingly careless in the treatment of her pieces. After all, there’s no danger of being mated!4

Incidentally, this ad could have been improved dramatically by having the woman on the right wear red. She would then make a marvellous Miss Scarlett on a visit to colonel Mustard. They just picked the wrong game.

Realism: 0/5 The chess board is the one place where you would want a king, goddammit, and they left it out! Mustard bastards.

Probable winner: No one. Black is never going to win and white just can’t.

1. [I nerd-sniped myself, trying to figure out whether people are actually in the middle of their clothing or not.]↩
2. [Stouffer also sounds like the Dutch word stoefer, which means a braggart.]↩
3. [You can make quick and easy chicken breasts or quick and easy chess diagrams. The choice is obvious.]↩ 4. [Another excellent defence against that occurrence, should it be undesired, is serving frozen chicken breasts.]↩