Sometimes a title tells you everything you need to know. If your movie is called It! The terror from beyond space, it is bound to be a low budget sci-fi creature feature from the fifties or sixties with little ambition and less success. Actually, it’s not all that bad. In some ways, the small budget even helps the film. The monster is barely ever fully on screen, which makes it more threatening, and the fact that there is basically just one location gives the movie a claustrophobic feel which is quite appropriate. That’s not to say it’s a great film, mind you, but it’s serviceable. The plot is as follows. The pilot of the first space ship that lands on Mars is accused of murdering his crew and is brought back to Earth by a rescue ship.1 Unfortunately, the real killer slips on board…

But that’s easily made up for: there’s also a chess set on board! The screenshot above is not so far into the movie, when the creature hasn’t even shown up yet. The ship is hurtling through space at what must be an astonishing speed, since in barely a few days they reach Earth from Mars. To take their mind of this alarming velocity, they turn to chess.

We get a reasonably clear shot of the board, but they are using really, really strange pieces. There are some elephant shaped pieces which logically should be the bishops, but there are no chariots. My assumption is, then, that these elephants are supposed to be the rooks and the taller, pointy figures are bishops. This would give the following reconstruction:2 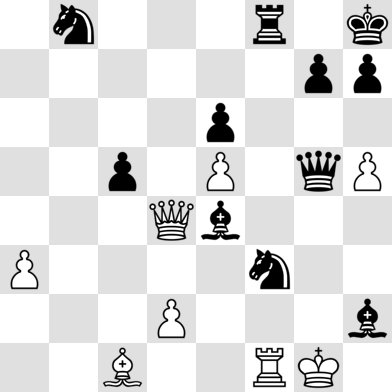 The person playing white is a certain Eric. He moves his king to h1, but then moves it back without letting it go.

Eric: Every move I make is worse.3

Quite. How on Earth did you get into this preposterous mess?4 Somehow, you lost two knights and a bishop, left your queen hanging, and got your king in a triple check which, to mere mortals, is impossible.

Even if we ignore the elephant in the room, if we accept that mountains might come floating by, that continental crust sometimes curls up into space to scratch the moon’s itch, even that white got into a triple check, there are enough problems. How come white’s d-pawn is still where it started? Why is black’s b8 knight still undeveloped? Why is white still playing on?

Most importantly: what monster would do such a thing? Was this whole mission just a ruse to get these guys off the Earth?

Realism:0/5 This is so illegal even a king might face repercussions if he did this. Probably the white one.

Probable winner: Black is up all of the material and white’s about to be checkmated.

1. [Because apparently Mars is beyond space.]↩
2. [There’s no need to go to Mars and back to make a nice diagram.]↩
3. [That’s what it sounds like he’s saying, but I’m not sure. The sentence seems nonsensical.]↩
4. [Okay, let me correct myself: How on somewhere in space did you get into this preposterous mess?.]↩