Time to talk about a video game once more! Little nightmares 2 is a puzzle-platformer from five years ago. In it, the player takes control of a boy called Mono with a paper bag over his head who is looking for a door he saw in a dream. Of course, this is not an easy task and he has to overcome all sorts of obstacles and monstrously deformed humanoids, the whole served with a side dish of creepy, very blue visuals and a sauce of soft, moody music. Somewhere in the second chapter of the story, there is a chess puzzle.

It’s not a chess puzzle in the usual sense of having to find a mate or a forced win of some sort, but in the sense of chess being involved in the puzzle. When you enter this room, you see one of the biggest nightmares in the game: the white pieces all have their heads sawn off. Your job is to collect these heads and put them back on the right body.

Once this is done — spoiler alert! — you get the following position:1 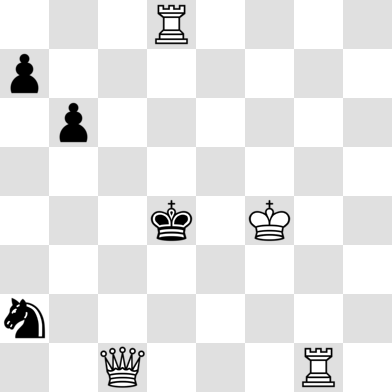 except that I’m not sure about the identity of the piece on g1. I have assumed it is a rook, but it might also be a knight.2 It’s not a bishop or a queen, because then black would be in an impossible double check. That it’s not a pawn or a king is even more obvious. Whatever the case, it remains headless.

And perhaps this stark reality is the real nightmare: if you have lost your head, people will only try to put it back on if doing so helps them reach their goals. Otherwise no one cares.3

Realism: 3/5 There are no major problems here, but I am kind of wondering how that black knight attacked the white queen and was then ignored. I guess white might have just thought he’d win in any way he liked.

Probable winner: White has mated his opponent. The nightmare is over.