It is a truth universally acknowledged that children are getting worse and worse at pretty much every subject in school. Almost every vaguely modern phenomenon has been suggested as a possible reasons. In this bog post, we will talk about one more potential cause. KikoRiki, originally Smeshariki, is a Russian series of cartoons for small children. Given its country of origin, you would expect some knowledge of and respect for chess culture. And at first glance, it seems you’d be right. After all, how many kids cartoon shows deal with two people playing chess at a cadence worthy of correspondence chess? But then…

First of all, the people are unreasonably spherical.1 But this I could forgive; even our beloved pawns have rather bulbous craniums. Maybe I could also forgive the complete and total lack of interest of the whole thing, although there’s really no reason to do so. But I cannot forgive what they have done to our noble game.

In the scene above, chess makes its first appearance and the position on the board is this one:2 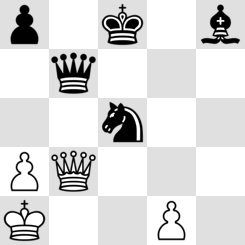 This might be a new record for most awful thing to ever appear on this blog and, unless I start adding videos of puppies being brutally tortured to death, it is not likely to be beaten soon. And this is even with me being generous. The white king and queen are almost indistinguishable; I might as well have switched their roles.

White has just dropped everything he was doing to run over to his friend. Once arrived there, he plays QxKt with the aplomb of a man who knows he’s winning, not getting mated on the next move. More surprisingly, his very red friend, who is not even looking at the board, reacts with surprise and horror. Most surprisingly, when he looks at the board it has changed completely: 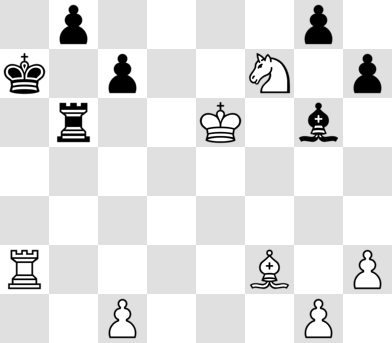 Gah! How did this get worse? The dimensions were wrong, the moves were stupid, there were pawns on both the first and last rank — and somehow it got worse?! You’d think that, just by accident, they’d get something right at some point! But no: now both kings are in check.

The episode goes on like this for quite some time, switching between boards of different dimensions with widely different positions. A real joke is nowhere to be found and the plot is thin as gold leaf. This, dear friends, is why children are falling behind. They are beset on all sides by the forces of chaos.

Probable winner: What they’re playing can hardly be called chess. Who knows how you win in their game?