What happens if you cross Winnie the Pooh with Psycho? This burning question that was on no one’s lips is answered in today’s subject. As you may know, Alfred Hitchcock had a very popular television series in the fifties and sixties. It was a kind of anthology series, wherein Hitchcock briefly introduced independent stories by all sorts of writers, directors, and actors. One of those writers was A. A. Milne, who is nowadays known pretty much exclusively for his Winnie the Pooh stories,1 and one of his efforts is our subject today. It aired in May 1957 and was directed by the prolific TV director James Neilson.

The plot revolves around a precocious young girl named Hildegard Fell2 and her attempts to get a local recluse more involved in the social life of her small town. When she first meets him, he is in the middle of a game of chess. This is where the above picture comes from.

Before that, we get a better but slightly less photogenic shot of the chessboard and we see that a1 is a black square! Is there hope? Might Hitchcock’s attention to detail have resulted in a decent position on the board?3 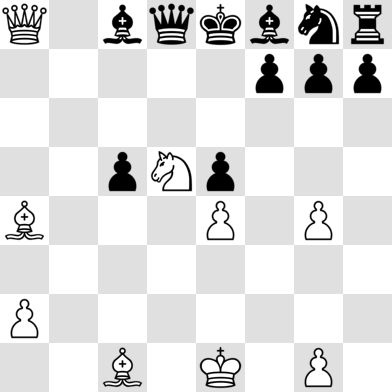 Clearly not. Admittedly, quite a bit of this position is mere supposition, but that mainly concerns black’s king’s side, not the white pieces. Especially not the sore thumb disguised as a pawn on g1.

I confess that when I was young and innocent, I had high expectations of Hitchcock’s notorious attention to detail, but this is for the birds. Maybe he was the wrong man for the job. Humph. I’m at the end of my rope.

Realism: 0/5 There is a white pawn on g1. At this point, Dalí would say you should dial it back.

Probable winner: Black is up a rook and pawn, but it doesn’t look like he can consolidate that advantage. On the other hand, if white gives him some time, he will be able to stabilise and he will win. it therefore seems like white has to settle for a draw by threefold repetition with 1. … Bd7 2. Nc7+ Ke7 3. Nd5+ Ke8 etc.

1. [For those who don’t know them: they are slightly quirky essays, told via anthropomorphised animals, on modern Chinese politics.]↩
2. [This is a rare example of a name that is also a sentence.]↩
3. [A diagram maker greatly beloved.]↩