After last week’s crime drama, there’s a courtroom comedy on the menu today. It is a film from 1992. At least, that’s the mainstream theory. I don’t buy it. In fact, I refuse to accept that this is a movie; instead, it is an excuse for Joe Pesci to be Joe Pesci on a grand scale.1 It is about two youngsters who go on a trip to the Alabama and get mixed up in a murder case as main suspects. They are broke and have to make do with the titular cousin Vinny as their lawyer. That’s where Joe Pesci comes in. Strangely, and perhaps unforgivably, this is where we will leave him and focus on the lawyer who presides over the case. Because he has a chessboard in his office.

Also, he is played by Fred Gwynne, one of the very few actors beside Pesci that leave an impression on the viewer. But that’s not our business. We are here to analyse the position he has before him. We are here to judge the judge.

Luckily, we get a very good view of the board, so our evidence is top notch quality. The only unfortunate thing is that I will have to play the role of chess expert, here. This may end badly.2 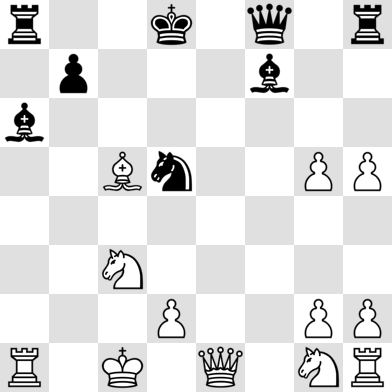 At least the board has not been rotated over half pi radians. There is some circumstantial evidence — the black king on d8, the white queen on e1 — that he committed lèse-majesté and swapped the kings and queens, but this is not proven beyond any reasonable doubt.

It is at this point that the judge, who does not seem to have an opponent, plays Nxd5. Here, Joe Pesci comes in, which greatly disturbs the judge who realises he has been caught in flagrante delicto. Luckily for him, Pesci knocks over the pieces with his briefcase and without noticing the disgusting perversions the judge has been watching. This, I am sure, is the reason he ends up winning the trial.

Realism: 1/5 Normally,I give a 2 if no pieces are in really odd positions, but this is too much. Black somehow promoted to a bishop without majorly disturbing the white forces. In turn, the white duo on g5 and h5 must have gone well out of its way to get there.

Probable winner: White threw away an easy win with his last move, of course. Black should now play Qxc5 after which he is up a piece, but white has four extra pawns. The Almighty Fish3 judges this as much better for black and it is probably right, but things can still very much go wrong.