The silent partner was recommended to me by one of my readers – a silent partner, if you like. It is a 1978 movie about a bank teller who outsmarts a bank robber and stashes a bit of the money away instead of handing it over. The robber is not happy about this and doggedly pursues the poor clerk for the missing money. Why he doesn’t just rob another bank, which surely would be far less work, remains unclear. To make it clear for the viewer that our hero the bank teller1 is a man of more than average perspicacity, he is shown at a chess board.

.In fact, he is shown with a Dover reprint, edited by Fred Reinfeld, of James Mason’s at the time of filming already very old Principles of chess. His chessboard is set up in the bay window of his very nice flat. Apparently, bank tellers are better paid than I thought. The scene above plays at the beginning of the movie, before anything has been robbed. Our protagonist has been snubbed on the phone and, in his anger, he does the unthinkable: he brushes the pieces of the board. Immediately, he realises the error of his ways and starts picking up the pieces again, whence the picture above.

Right before that, however, the pieces were standing on the board. The director has been nice enough to provide a very nice sweeping shot over the board, so we even know where they were standing:2 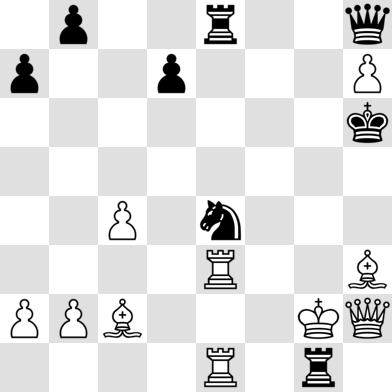 As you can see, this is the sort of cursed knowledge that got Adam and Eve expelled from paradise and that no one believed from Kassandra. This also explains our protagonist’s otherwise incomprehensible outburst of anger. While he was on the phone he was distracted, but then he suddenly sees what has happened on the board. He realises someone must have broken in into his flat, just to pose the poor pieces in this deplorable arrangement.

Because even though I’ve never read the Mason book I’m still pretty sure it doesn’t include this position.

Realism: 0/5 There’s a black pawn on b8. Even if it wasn’t there, it’s hard to come up with a plausible last move, let alone a whole plausible history of the game. How on Earth did the black rook end up on g1? Did a black pawn take a piece on g1? If so, why didn’t he take the rook on e1? And what is up with the black king on h6 and queen on h8? It would be so much more believable if their positions were swapped. Well, actually, not as long as there’s a black pawn on b8.

Probable winner: White. A rook, two bishops, and an extra pawn should suffice.