Dance of the vampires is a film by Roman Polanski which is supposed to fuse comedy and horror but falls a good distance short of that goal. Apart from the admittedly rather funny subtitle Pardon Me, But Your Teeth Are in My Neck, there is not much in the way of humour.1 Some mediocre slapstick, but that’s it. The most interesting thing in the movie happens when the vampire hunter and his little vampire hunter to be arrive in the castle of the local Dracula counterpart. As Dracula is a sophisticated count, he is playing chess. As he is hundreds of years old, he plays with non-Staunton pieces.

The failed Einstein in the middle is the vampire hunter. The failed Meriadoc Brandybuck on the right is his sidekick. Obviously, the bored gentleman on the left is the vampire. He has been very machiavelian in his attempts to avoid being spotlighted on my blog: not only is he using non-standard pieces, but he is also using a board with some kind of counter-coloured rim around it to make my task especially difficult. But I’m not so easily scared off. For one, I can tell that his a8 square is black. I can take the kidnapping and blood drinking,2 but that’s just evil.

But it’s not sophisticated evil. For that we must have a look at the board:3 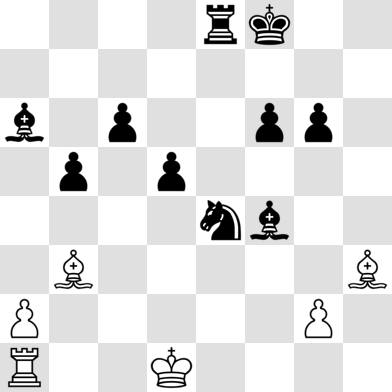 This reconstruction is doubtful in any amount of ways. The pieces are pretty much unidentifiable, the board is too small to reliably make out the squares they’re standing on, and for some pieces it’s not even clear whether they’re on the board or captured and standing right next to it.

It is clear, though, that the dark forces are much in the majority and that they will ruthlessly crush all opposition like Alekhine in San Remo. The wish is father of the thought, I guess. Or perhaps Polanski is admitting a personal preference here.

Realism: 3/5 This is not the most unlikely position. Clearly, these are not the strongest players ever, for otherwise white must have resigned ages ago. But that’s not unrealistic; there are plenty of bad players around.

Probable winner: Black. The forces of evil. It’s not a very optimistic film.

1. [From what I understand, the original UK release was named Dance of the vampires, but later releases were called The fearless vampire killers. I am not sure whether the original release had the same subtitle.]↩
2. [I’m still on the fence about the candle wax on the table.]↩
3. [You can make your own board to look at here..]↩