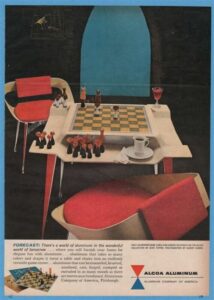 Compared to the Bohn ad, this one is much less weird. The talk about communism is absent and instead there is the usual twaddle about the actual product the company makes. It is slightly strange that, as their showcase of aluminium, they show a chess set. As far as I know, wood has always been the material of choice for chess sets, with plastic becoming a somewhat inferior but cheaper alternative in the last fifty years or so.

But all of this is entirely irrelevant. What’s the chess like? That’s the real question. Luckily, the reconstruction is easy. Or it would have been had the pieces not been these weird designer contraptions. There are four pieces, three light-coloured ones and one darker one. The dark one and one of the light one are considerably larger than the other two, so they are doubtlessly the kings. I’m not fully sure of the identity of the two smaller light pieces, but I strongly suspect that they’re both bishops. Under these assumptions,2 the position is the following:3 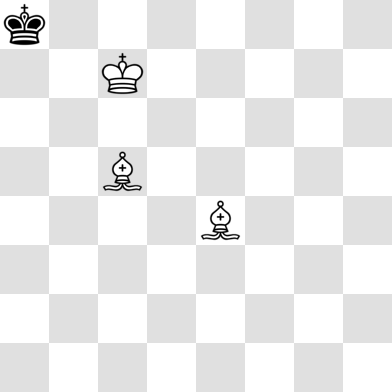 And, well, that’s a perfectly reasonable position. Black should perhaps have resigned many moves ago, but the players may be beginners. Or perhaps someone has been demonstrating how to mate with two bishops.4

I think the black king might be emperor Heinrich IV, left in the snow at Canossa by pope Gregorius VII whose two bishops keep him in check.

Realism: 5/5 I didn’t even check any database. Of course this is a real position.

1. [I don’t know when exactly, but the design screams early seventies to me.]↩
2. [And the additional assumption that the first rank is closest to us.]↩
3. [This can’t quite make diagrams out of aluminium, but it’s the next best thing.]↩
4. [Warning: may cause defrocking.]↩