By: Nikolaas VerhulstPosted on December 28, 2021

Our subject for today is one of the stranger ads I have seen. It appeared in the Saturday Evening Post in 1952 and was apparently commissioned by Bohn Aluminum & Brass,1 a Detroit-based manufacturing company which came into existence because of a merger in the twenties and disappeared after another merger in the sixties. But the ad never says anything about aluminium, or brass, or any of the company’s products. In fact, the only metal in the whole thing is clearly used for evil purposes. 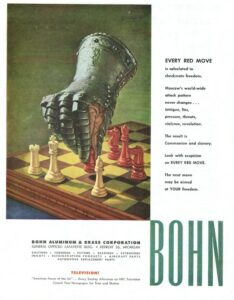 Yes, this glove is filled not just by any disembodied hand, but by a communist disembodied hand! Shudder in fear! Even worse, if we are to believe this ad, red is trying to checkmate his opponent! Who would do such a thing? And, more interestingly, how close is the realisation of that goal?

It is hard to give a good answer to that, as we only see about half of the board. But judging from that half, it seems like a checkmate is imminent. The white king has lost its protective coating of pawns and is now only supported by a rook from the left and a bishop from the right. Meanwhile, a pawn, two knights, and a queen of his opponent are alarmingly close by:2 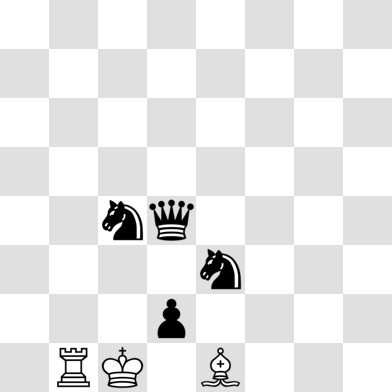 Yes, there’s no black king, but that’s not necessarily a strike against this position. After all, we only see part of the chessboard and it is not at all unlikely that his highness is hiding somewhere on the king’s side — it is the king’s side after all. In fact, this may be why black’s queen is pursuing the white king so relentlessly: he is on her side.

Realism: 4/5 There is absolutely nothing ridiculous here. Well, on the chessboard at least. The board has been set up correctly and the white pieces have that distinct look of cramped exhaustion prey gets from persistence hunting.

Probable winner: Difficult to say when you see only half of the board. It seems black3 is doing very well, though. Unless white has some serious power eyeing d2 just out of frame, he’s in for a terrible ride.