By: Nikolaas VerhulstPosted on December 21, 2021

During the course of the years, this blog has put the spotlight on a number of forgotten merchandises: The crime doctor, the Philo Vance series, Kunt U mij de weg naar Hamelen vertellen, mijnheer?, and even a supremely obscure blog about chess in popular culture. Today, there is another item for that list. The lone wolf, nickname of Michael Lanyard, is a character created by a Louis Joseph Vance.1 He is a former criminal who has changed his way and is now a detective. He made his debut in books, but he ended up starring in well over twenty(!) movies.

This one, The lone wolf spy hunt, was released in 1939. A crook tries to get Lanyard to crack a safe for him. It doesn’t go quite as smoothly as he might have hoped. In the screenshot above, he has just left the frame to get some papers. They must be very fascinating papers indeed to make him leave his chessboard. Or is perhaps the position too boring? Let’s find out!

Miraculously, they have managed to put up the board correctly! Surely this crook is some kind of genius! An evil one, sure, but a genius nonetheless. I think the position is this one:2 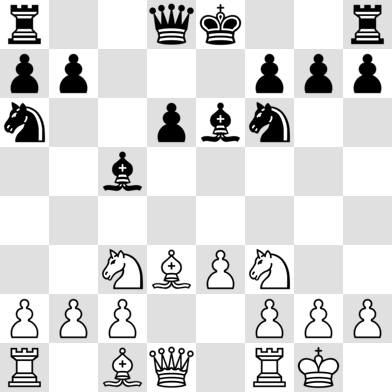 I’m pretty sure about the position of the white pieces, but less so about those of the black ones. I think the piece count is correct, at least, because there seem to be two black pawns and one white one standings next to the board.

One of the black knights is also worryingly close to just scuttle of the board and trot away. Probably fleeing from the wolf.

Realism: 4/5 This one is not too silly. The opening must have been rather weird, though. It seems likely that the game started with 1.d4 e5, that black played Bc5, then played d6, pawns were traded on d6, and finally black’s light-squared bishop came out to e6.

Probable winner: That’s hard to say, as the game has barely started. White has an extra pawn and black can hardly have sufficient compensation so I guess he has the better chances, but especially among amateurs a single pawn doesn’t mean too much.

1. [I’m pretty sure these two Vances are not related, as one of them is fictional and the other isn’t. It is one of the stranger coincidences I’ve encountered while writing this blog.]↩
2. [The chess diagram hunt.]↩