Whoever heard of a fantasy television series conceived as a sequel to a Grimm fairytale with a nine word title and 45 minutes episodes which are put on hold three or four times for a song? Well, now you all have! Can you tell me the way to Hamelin, sir?,1 for that is the translation of the horribly long title, was just such a show. Airing on Dutch television from 1972-76, it pertains to answer the question of what happened to the children of Hamelin after the pied piper lured them away. No matter how alluring the concept might be, it only becomes interesting for us at the beginning of one of the last episodes, we see two of the main characters, Bertram Bierenbroodspot2 (Rob de Nijs) and Hildebrandt Brom (Ab Hofstee), playing chess. 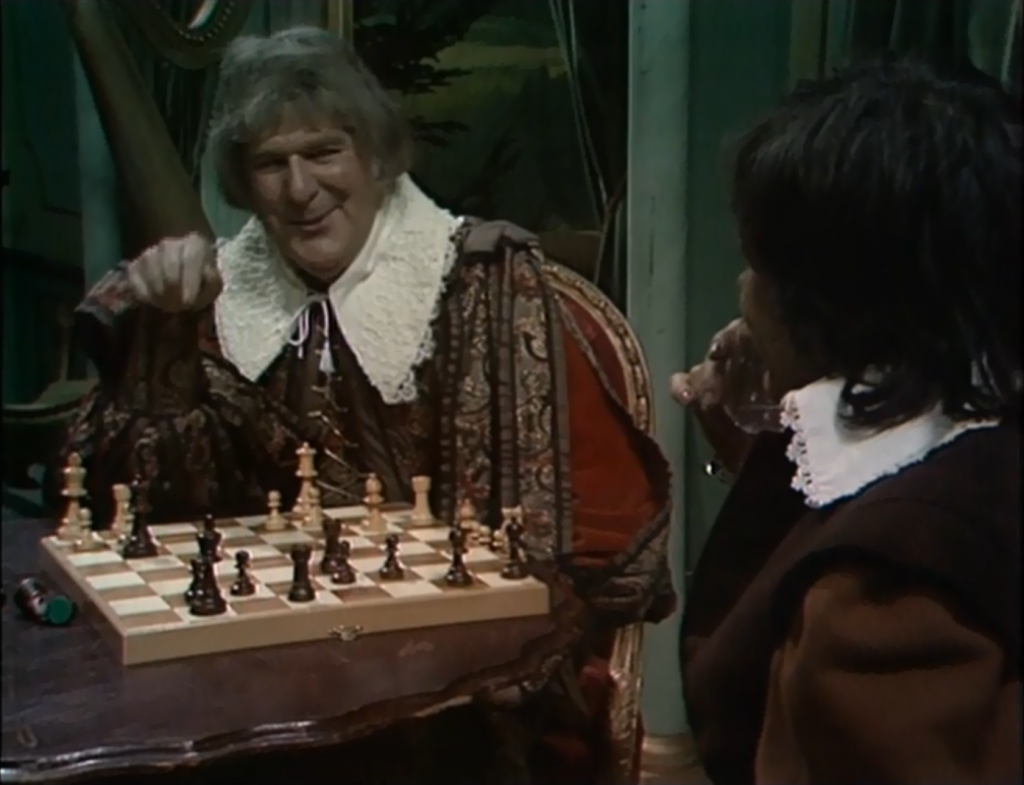 Clearly, the actor playing Hildebrandt is terribly amused by the fact that they are supposed to be in a medieval setting yet are playing with a Staunton set, which was not to be developed for centuries to come.3 He might also have some doubts the historical accuracy of his ruff in a strictly medieval setting, but it is not completely clear when the pied piper of Hamelin is set.

Putting aside all questions of anachronisms, let’s look at the board. We’re coming in a bit late, by the way, as Bertram has just captured a knight on g3 with his queen. Right before that, the position had been as follows:4 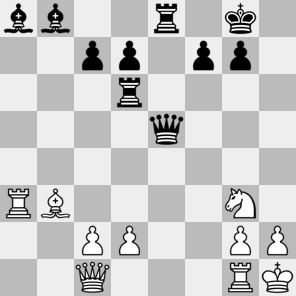 This Qxg3 is greeted by delighted laughter and the following conversation ensues:5

Bertram: Why are you laughing?

Hildebrandt: You shouldn’t have done that, I had been waiting for that for a while now. You can resign now.

Let me intercept here for a moment. For a brief instance, I was hoping this was all a set up to showcase the simple but effective zwischenschach Bxf7+, which would win the queen on g3, but then I realised that Bertram is the hero of the series and that he therefore has to win the game. He himself seems equally confident:

Bertram: Is that so?

Here, white actually takes the queen with his pawn and, after a short interruption by Bertram’s love interest, gets smacked with Rh6#.

Of course, even if white had played Bxf7 black would perhaps have some material compensation for the queen, but clearly not enough – all the more so because his king would have been terribly exposed.

Realism: 1/5 What on earth happened here? How did black’s bishops ends up on a8 and b8? By what miracle did black’s rook reach d6? What brought white’s queen to c1? Why, oh why, have both sides’ c- and d-pawns not moved at all?

Probable winner: Bertram, but he deserved to have his ass handed to him for allowing Bf7+.

1. [Clearly, this was before Google maps, which will immediately tell you the answer.]↩
2. [A name which might be known to the more fanatic chess player.]↩
3. [Or possibly he’s contemplating how the mulberry tops are rustling.]↩
4. [Yes, I can tell you the way to the diagram editor.]↩
5. [Freely translated from Dutch by me.]↩