Here we go again. How many times have I spotlighted television series about detective?! The Mentalist, Midsomer Murders, Columbo – I have the impression that I’m barely talking about anything else! Is it just that crime fiction has sort of become the default genre for tv series or is chess more likely to be featured in it? Whatever the case, it’s time to go back to our wheelhouse. This time, we’ll be talking about the Flemish crime series Professor T., which is about professor of criminology Jasper Teerlinck (Koen De Bauw) and the cases he deals with. Is it good? I’m tempted to say no and, since there’s nothing stopping me, I’ll say no. Not that it’s horrible; it’s just in all respects slightly worse than its higher budgeted competitors named above. 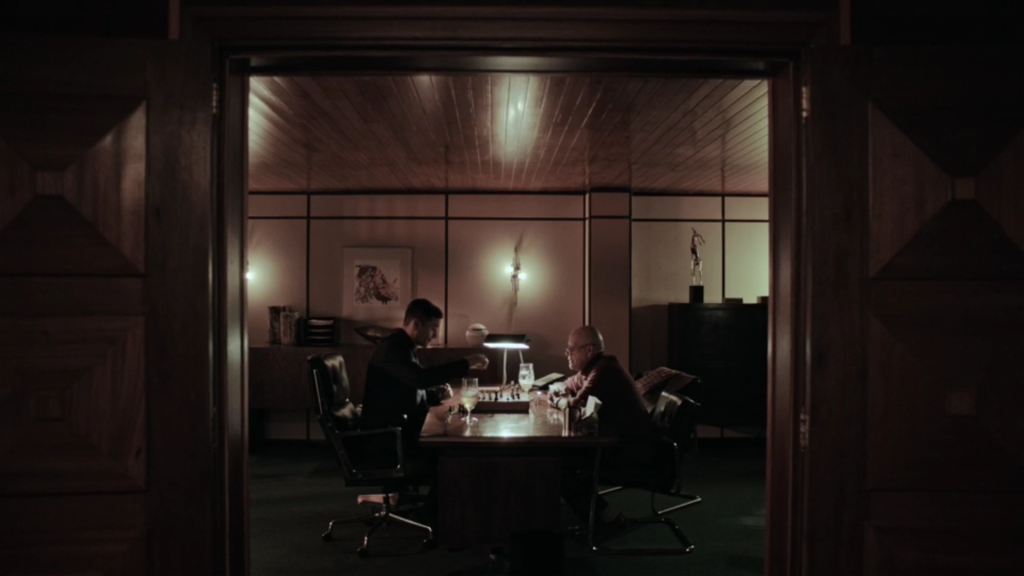 In this particular episode, the title of which translates to The DNA of a murderer, the eponymous professor T is explaining a case to his students and trying to get them to solve it. But the case, the victims, the suspects, and the students are all of no interest to us, as there is no chess involved anywhere. We only start perking up at the very end of the episode, where we can spot our professor playing chess against his great predecessor, professor De Paepe (Carry Goossens).

There are some pretty clear shots of the board and they are, contrary to what the picture above would suggest, well-lit, so there is no problem whatsoever in reconstructing the position. Here it is:1 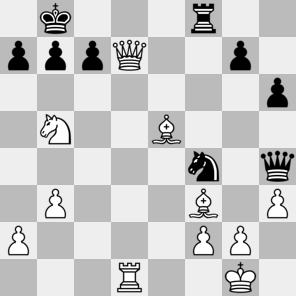 Clearly, white is winning. He is a bishop pair up and the only thing black could claim as some sort of compensation is the vague idea of a possible kingside attack at some unspecified point in the future if white doesn’t checkmate him first. The easiest way to convert would be Qc7+ followed by Qb7#.

Instead, the professor has to be reminded that it’s his turn and the following conversation ensues; the moves being added in brackets where they are played:2

Walter De Paepe: You don’t seem to be with it.

Walter De Paepe: Did she say that? [Ka8]

Jasper Teerlinck: No, because she doesn’t yet know it herself. Checkmate. [Qc8+]

No it isn’t, you filthy swine! There is a black rook on f8! You just put your queen en prise, like a moron! Taking on b7 was already a silly move, considering you had a completely obvious mate in two at your disposal, but Qc8+ takes blundering to a whole new level. Even now, Qa7# was possible. Worst of all, De Paepe doesn’t call professor T.’s bluff!3 Apparently, the standards for becoming a professor of criminology are criminally low.

Realism: 2/5 Were it just the position in our diagram, this one would probably get a three or a four, because it could easily occur if the players needlessly prolong their game, but the continuation shown knocks it down to two – and that’s only because I’m being gentle.

Probable winner: Teerlinck; as his opponent accepted defeat in a winning position.