I have always thought it rather strange that there is so much Swedish pop music. In classical music, the Swedish presence is basically nil, but half of all pop music is Swedish. There was ABBA, of course. There was Ace of Base, there was Avicii, and there still is Karl Sandberg, who has written about half of all pop music for the last decade or two.1 And there is Roxette. Started in the late eighties, they broke through in the very beginning of the nineties with hits like The look, Dangerous, Joyride, and today’s subject It must have been love. At that point, video had already killed the radio star, so an accompanying music video was shot as a matter of course. Most of the video is singer Marie Fredriksson repeatedly coming to the conclusion that it, whatever it was, must have been love. Then, during a lull in the singing, when the audience’s attention inevitably starts waning, they viciously pull it back by showing a chessboard. 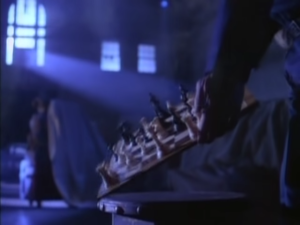 Showing a chessboard being mistreated horribly! Some asshole just decides to take a perfectly innocent chessboard by the corner and let the pieces slide off, falling where they may. Someone was playing here! Or analysing! Even if you were somehow justified in clearing away this board you should still show some basic decency and not scatter these poor pieces all over the floor. Who knows, maybe you even caused a king to lose its cross, or a knight to lose its bottom.

A few weeks ago, I had to reconstruct a position which had been shaken up quite badly, but that was nothing compared to this. The position is shown for a much shorter time here, it is half hidden from sight by an arm, and there is not even an attempt to keep the position intact.2 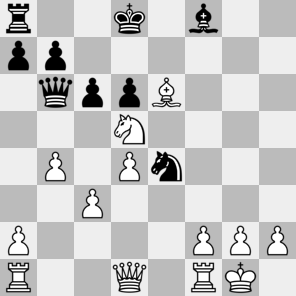 This is my best reconstruction, but I could not even make an honest attempt for black’s kingside – and I have no interest in making a dishonest one.

From what little we can observe, it seems like black is not particularly hindered by such scruples.  He has allowed a white knight and bishop to penetrate his defences and, worst of all, he put his queen in serious peril. It might have been love, but it’s clearly over now.

Realism: 2/5 It’s hard to grade this position, as it is so uncertain, but the white piece deep in the enemy lines, the odd placement of black’s queen and the unusual pawn formation on the queenside suggest there’s something distinctly weird going on.

Probable winner: Nobody, unless someone took the precaution of noting down the moves or both players remember their game perfectly. Given our reconstruction, the latter seems unlikely.

1. [Which explains why so much of pop music make no sense whatever. ‘Hit me baby one more time’, for example, was supposed to mean ‘call me baby once more time’ but Martin’s grasp on teenagers’ slang is, or at least was, somewhat limited.] ↩
2. [Just take a look. What in the world could make a diagram so good?] ↩