About a decade ago, Breaking bad was the hottest thing on television. It was a television series about a chemistry teacher diagnosed with cancer who decides to make some crystal meth and thereby money to not leave his family in financial troubles after his death. It won a total of about about fifty bazillion awards, has universal critical acclaim, and is widely regarded as one of the greatest television series ever. In order to gain such high appraisal, an eye for detail is indispensable, so maybe, just maybe, this show, if any, can get a chess scene right. There was a long wait, but in the sixth episode of the third season we finally get a chance to find out. Almost twenty minutes in the episode, main character Walter White is cooking meth with his new sous-chef Gale Boetticher. To make it clear that these two are Very Smart People, they are shown playing chess during a break. 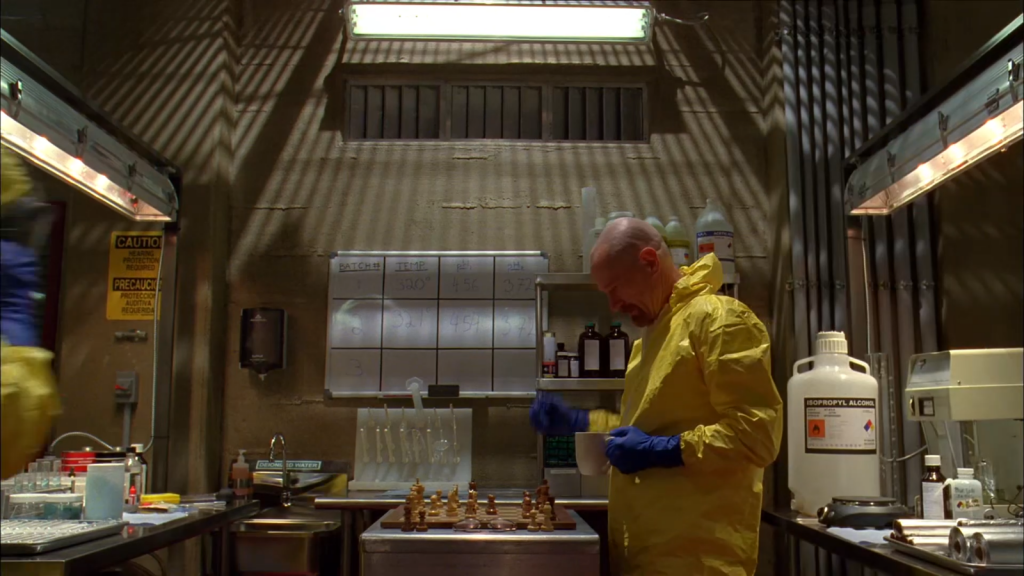 Of course, if you are a faithful reader of this blog1 you will have learned the hard way that it is not a good idea to have too high expectations.

There are only a pawn and bishop from both sides standing next to the board, so the rest of the respective forces must still be on the board, which is an important help in the reconstruction of the position. Unfortunately, we only get a side view of the board from a relatively low angle, so we need all the help we can get. I’m pretty sure that white’s dark-squared bishop got exchanged against black’s light-squared bishop – how that happened is already a bit of a mystery -, white’s knights have been developed to f3 and a3 (?!), and then there are some pieces and pawns clustered together in the centre. My best attempt is the following:2 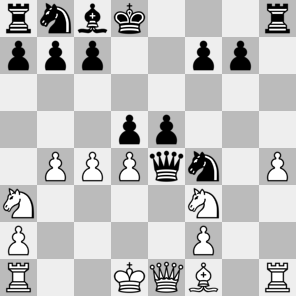 which fits the aforementioned criteria. It also makes clear that our protagonist have indeed broken bad and are now firmly on the dark side.3 Never mind the strange positioning of the knights. Never mind the weird bishop exchange. Never mind  black’s weirdly active queen. The real unforgivable sin is the misplacement of kings and queens.

And that’s why the police is looking for them.

Realism: 2/5 It’s a bit of a conundrum. If I have to give the realism that a game of chess would ever lead to this position, it’s going to be a dismally low number. If, on the other hand, I have to estimate the possibility that some people who think they’re playing chess end up here, it’s going to be significantly higher.

Probable winner: White, that is, Black, who is better developed and can, if my reconstruction is correct, simply take a piece.